Cork reach final but still have plenty of room for improvement 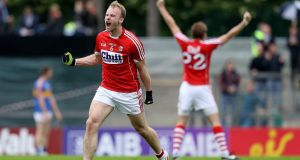 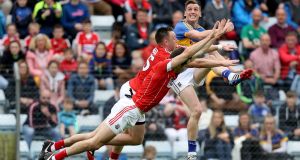 Tipperary’’s Conor Sweeney looks on after kicking a point despite the efforts of Paul Kerrigan and Jamie O’Sullivan. Photograph: Tommy Dickson/Inpho

Cork manager Peadar Healy is dreading a repeat of the dire first-half display from his side when they take on Kerry in the Munster final at a refurbished Páirc Uí Chaoimh on July 2nd.

A fourth-minute Luke Connolly point was the sum of their efforts in a wind-assisted opening period at Páirc Uí Rinn on Saturday evening.

Tipperary turned around 0-4 to 0-1 in front, their prospects then boosted by a couple of points from the outstanding Conor Sweeney within a minute of the resumption.

“You can’t play like that against Kerry in a Munster final because they will be gone out the gate and on the bus to Killarney if we perform like that again in the first-half,” Healy said afterwards.

Yet Cork still had the wherewithal to mount a serious revival and just about shade an exciting but poor quality game on a difficult surface and in swirling winds.

Six points on the spin helped Cork nudge 0-7 to 0-6 clear after 52 minutes and Healy was quick to praise his beleaguered players.

“They responded brilliantly, first to the opening two points scored by Tipperary in the second-half and then later in the half, when Tipp got their goal.”

Once again Sweeney showed his class by deflecting Colm O’Shaughnessy’s dangerous high ball to the net four minutes from the end of regulation time for a 1-9 to 0-10 lead.

However, Cork cancelled it out within 30 seconds as a flowing move involving James Loughrey, Michael Hurley and Mark Collins teed-up Connolly to palm the ball over keeper Ciaran Kenrick.

“I don’t think you will see a better goal than ours. It was a terrific goal and they got a bit of confidence from that,” added Healy.

His Tipperary counterpart, Liam Kearns, took a different view. “It was a sucker punch,” he declared. “Maybe we were celebrating. Maybe we thought it was match over.”

Tipp’s cause was undermined by the serious injury suffered by All Star Michael Quinlivan, who was stretchered off after just 18 minutes.

“Losing Michael was a massive hit altogether,” said Kearns. “It’s ankle ligaments and we don’t know the extent of it yet.

“We feared a broken ankle, so thankfully it’s not that, but he’s set to miss the first game in the qualifiers.”

Cork changed tactics in the second-half by forcing their opponents to go long with their kickouts as Ian Maguire became a growing influence in this key zone.

“Cork took chances by pushing up on our sweeper. They took over the middle third, but left a lot of space behind and I don’t think they would have done that if Michael was there because he’s a target for our kickouts,” Kearns added.

Quinlivan wasn’t the only casualty as debutant corner-back Shane O’Connell limped off with a recurrence of the foot injury which blighted his 2016 season.

“Cork probably deserved to win the game based on the second-half, but I’m very proud of the players considering we’re down so many.

“I don’t know what we’ve done to deserve it. We’re like a small hospital at this stage.

“Maybe we’re better off letting Cork play Kerry because of the way we are at the moment,” Kearns quipped.