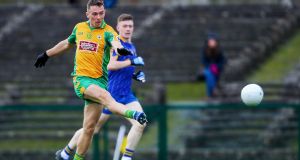 Both clubs have 15 provincial titles between them, but it was Corofin who emphatically displayed their undisputed superiority this decade with a superb team performance from pillar to post.

The reigning All-Ireland champions, liberated from the defensive conundrums they have had to face in eking out a sixth Galway championship in succession recently, were irresistible, with man-of-the-match Jason Leonard helping himself to 2-6 over the hour.

For Clann na nGael, it made for painful viewing, and their cause wasn’t helped by the loss of Donie Shine to a black card after 30 minutes, followed quickly by the dismissal of midfielder Ultan Harney on a straight red shortly afterwards.

An early point from Ronan Steede was followed immediately by a goal from full forward Colin Brady who replaced All Star Ian Burke, who was suffering with a rib injury, in their starting 15.

A brace of Shine frees kept Clann na nGael in the game early on but Corofin, aided by the energy provided by Dylan Wall and Kieran Molloy from their wing-back berths, soon put significant daylight between the sides.

Four points in succession from Leonard were followed by further scores from Brady, Michael Lundy and Wall (two). Then, in the 29th minute, Mike Farragher’s effort for a point was held up in the wind. Molloy chased what seemed like a lost cause, gathered and squared the ball unselfishly for Lundy to net his side’s second goal.

Leading by 2-10 to 0-3 at the break, the one-way traffic continued in the second half as Corofin toyed with a Clann side bereft of any confidence. Leonard emphatically crashed the ball to the net to banish any hopes of a Clann revival soon after the restart.

The same player finished off a brilliant team move for Corofin’s fourth goal in the 46th minute as Kevin O’Brien’s side set up a Connacht final meeting against Mayo champions Ballintubber in a fortnight.