Cillian O’Sullivan: Another fork in the road for Meath footballer 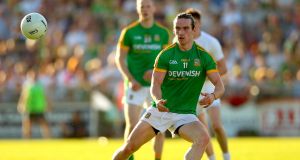 With 15 minutes left in the 2012 All-Ireland minor final, a Meath challenge that had been plummeting to earth suddenly popped a parachute. They had trailed Dublin by five at half-time but were inching their way back into matters, and now a Fiachra Ward penalty brought the gap down one. A chunk of the Dublin team had been mugged in the previous year’s final by Tipperary, and nobody needed to spell out the clear and present danger of it happening again.

Fork in the road time. Over the closing quarter-hour, Dublin outscored Meath 0-6 to 0-1 to take the city’s first minor All-Ireland in 28 years. Of those six Dublin points, Niall Scully scored one, Cormac Costello iced another, Shane Carthy landed two. That was the Dublin minor team of Eric Lowndes, Conor McHugh, David Byrne and Conor Mullally, all of whom went on to play senior as well. You’d need a Nasa computer to keep track of the league, Leinster and All-Ireland titles they have between them now.

Cillian O’Sullivan was Meath’s best player that day, scoring an early point and skinning the Dublin defence with his pace all afternoon. Seven years on, he has played just nine championship matches for Meath and lost six. His victories have come against Louth (twice) and Sligo. That minor final in 2012 counts as the last time he played football in a Meath jersey later than the second week of July.

“I look at the under-17 team from last year that made the All-Ireland semi-final and I’m just praying to God that they are kept together. They’re good players, keep them interested, help them with their schoolwork, help them find the right college for them, keep connected with them to help them progress along and get them through the system.

“We had a glut of players who came through, but a lot of it was down to pure stubbornness on the part of the players. We wanted to play for Meath and that was enough. We missed a couple of years of group development – it’s clear as day that we didn’t have our house in order the way the Dubs did. Go through the Dublin team that beat us and you see lads who had a pathway. The structure was there and the transition was made easier for them. They still had to go and do it but there was a road laid out for them.”

You realise when you don’t have your sport, who are you? Who am I as a person?

That figure of nine games is maybe a little misleading, all the same. O’Sullivan has played every championship game he’s been available for. After his minor year, he went travelling in Australia for 12 months before joining up with the Meath seniors on his return. Having pulled up with a back injury in a league game against Monaghan early in 2014, he tumbled into a two-year pit of torture.

They spent a year giving him injections and physio to try to mend him, but eventually conceded defeat and had to send him for surgery. It meant a further year on the sidelines, the first month of it spent lying on the flat of his back, the next three months of it in a back brace. In all, he spent 23 months out of football, beginning the week of his 20th birthday.

“You realise when you don’t have your sport, who are you? Who am I as a person? When you rely on GAA the whole time, it’s a bit dangerous really. Because it’s going to stop at some stage, so I’m just making sure that I’m doing something that I love outside of it.

“For me it was realising that, okay, I don’t have football, what else do I have to talk about? Where is my other social circle that I can speak to when I’m not in the GAA circle? For a time I couldn’t stand being around football. I couldn’t stand going to games. Two years is a long time – you do have to find something else. People move on, people quickly forget.

“So it was a matter of making sure that if I was ever in that situation again, I would be well-resourced and prepared for it in terms of having other passions, other things to invest myself in if and when the GAA stops. I went off and learned the piano. I poured myself into my studies and into my general friendships around college. I loosened up socially a bit more.”

By trade, he is a rehabilitation psychologist, working with the National Learning Network. After UCD, he did a year in Leeds, flying over and back to play in league games. After one too many times trying to explain Gaelic football when people asked what the bruises were about, he just told them he was playing rugby. It was a handy out – his brother Hughie is an up-and-coming scrumhalf with Leinster and has been alternating starts with Jamison Gibson-Park recently.

I’m fascinated with people in general. That’s why I got into psychology in the first place

His job has him on the road in Meath, Cavan and Monaghan, walking into fresh situations every day and talking real life with troubled souls. His time is largely his own – or at least enough of it is to let him shape the rest around football. But he’s as immersed in it as he is in his other life. Deliberately so.

“I’m fascinated with people in general. That’s why I got into psychology in the first place. Personally, I made the mistake of investing too much of the GAA in my identity. Too much sport in my make-up. Going into college, I was all GAA, it was all I ever did. And then in the first year of college I got injured and then I was out for two years.

“I’m not going to be bitter against my sport at the end of it. You see some lads finishing up and their attitude is, ‘What did being involved in that ever do for me? I gave all those years and at the end of it I’m in this job I don’t like that I was doing because I was giving all my hours to the GAA.’

“I’m making sure that I’m enjoying my football, that I leave it in a good place and that I have something else to enjoy as well. I recognise the sacrifices that have to be made for football and I’m happy to make them. But it’s not a career.”

Like everyone, O’Sullivan has seen players come and go, from his county and others, lads who have made the determination that it isn’t worth the commitment. The lazy knock on them is that they’re taking the easy out because they haven’t a sniff of a medal at the end of it. His wing-forward team-mate Graham Reilly is the only non-Dublin player still togging out who has a Leinster medal to his name, after all. But for O’Sullivan, it isn’t as straightforward as all that.

“You have to look at input versus output. It’s not just about winning any more. What experiences are you getting out of having an intercounty career now? What life skills are you learning? I think that’s where some counties are probably falling down and losing players, more so than the prospect of medals or whatever.

“You can’t just be relying on enjoyment and passion. When you’re putting so much into being on an intercounty team, you need to be getting help with career skills and opportunities. You need to be picking up tools for life in that set-up. That’s what the Dubs do so well. It’s not just what they get out of it on the field, it’s what it does for them off the field.”

The Dubs loom over everything, of course. They won’t come back to the pack unless and until Meath and Kildare become viable opposition again in Leinster. Even though it’s a distance away still, O’Sullivan doesn’t shrink from how vital it is that it happens.

Kildare is an acid test for us as a team. We’ve had some good results but this is the toughest opposition we’ve played so far

For now, Division Two needs to be escaped. Meath have been rooted in it for the past seven seasons, neither good enough nor bad enough to go up or down. They’ve started well this spring, their only defeat a careless one in a game they ought to have won against Donegal. Kildare are getting rolling as well, and Navan on Saturday will feel a little like championship, a drop of truth serum on everyone’s tongue. Time to sort out what’s actually what.

“We’ve been in Division Two for a long time and we haven’t deserved to get out of it. But you’re starting to see the odd little spark of what’s going to be needed, I think. It’s going well but look at what we’ve done. We lost to an under-strength Donegal. We beat Armagh without their key forward, a Tipperary team without their key forward and a Cork team which has had a number of retirements and are in a bit of a low just now.

“So Kildare is an acid test for us as a team. We’ve had some good results but this is the toughest opposition we’ve played so far. They’ve come down from Division One last year, they’re a Super-8 team. They’ve done the things we haven’t and we won’t know where we are until we play them.”

Potentially another fork in the road, then. Meath need to be the ones going the right way this time.