Emlyn Mulligan has Croke Park in his sights with Leitrim 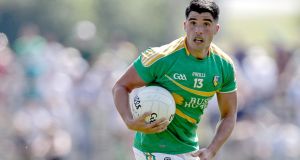 Leitrim’s Emlyn Mulligan: “We’re all ambitious, we all want to play the top teams but Division Four teams have taken a lot of hammerings over the year”. Photograph: Laszlo Geczo/Inpho

Emlyn Mulligan is struggling to conceal his anticipation. In 13 years as a Leitrim senior footballer, and one of the country’s best forwards, he has never pulled on the green jersey at Croke Park but the promised land is finally in sight.

They play London in Carrick-on-Shannon on Sunday and depending on how results go elsewhere in Division Four of the Allianz League, Leitrim could be promoted.

For a county that has operated in the lowest tier for a decade, finishing eight points off promotion last year, going up with two games to go would be a remarkable achievement. It would also guarantee Mulligan that day out at Croke Park in the Division Four final in late March.

It would be great to get up there in a Leitrim jersey, great for Leitrim, great for the fans

“It’s something I’ve always been dreaming of,” says Mulligan. “I often feel that it’s something I’ve wanted so badly it might have been nearly destined to pass me by. A few months ago I actually got an opportunity to play there for the first time in a game between the army and the guards. It was a massive weight off my back because it allowed me to take my focus off it. I’d nearly fixated on it, to be honest, and then people were writing about it and you were almost getting annoyed.

“So it would be great to get up there in a Leitrim jersey, great for Leitrim, great for the fans. But I’m not getting too carried away because we need to beat London this weekend and see how things go after that.”

The strong sense, however, is that Leitrim have done the hard work, achieving their fourth consecutive win by beating Limerick by a point in Kilmallock last weekend.

By remarkable coincidence, the last time Mulligan played there was in 2008 when Leitrim lost a one-point game, allowing Limerick to leapfrog them in the table and sending Leitrim down to Division Four, where they’ve remained ever since.

Mulligan scored eight points that afternoon 11 years ago but it should have been nine as he missed a free late on that he’s never forgotten. If they’d drawn the game, Leitrim would have stayed up.

“Unfortunately I missed it and I remember walking off with my head down afterwards and some Leitrim fans abusing me as I was coming off the pitch,” he says.

They’ve had more dark days since, finishing seventh in the lowest tier in both 2011 and 2016. The addition of Terry Hyland as manager this year has brought with it an instant impact.

“A lot of belief actually came from the New York game last summer, winning a tight championship game, and then beating Louth,” says Mulligan. “There hasn’t been as big a turnover of players as normal either. Getting a big name in like Terry helped with that. I’m only back four or five weeks myself because I got married and was on honeymoon but the atmosphere is terrific, winning games makes training on Tuesday and Thursday nights that bit easier.”

The painful reality for Leitrim, and all of the other counties without a chance of provincial success, is that the league is their championship.

Since the qualifiers were introduced in 2001, Leitrim have played just 49 championship games, less than half the 104 Dublin have contested. That’s an average of less than three games per summer meaning that the bulk of Leitrim’s season is typically played in wet and windy conditions weather during spring.

GAA president John Horan’s ambition is to create a B or second tier championship for these counties and a special congress later in the year could rubber stamp his plan.

Mulligan can see the potential benefits, pointing out that Leitrim have to play Roscommon, a high functioning Division One team, in the Championship this May.

“This league has been competitive and brilliant for us but six weeks later we’re being asked to jump up three divisions to play a Division One side,” he says.

“In reality, if we’re to win Connacht this year, we’ll probably have to beat three Division One teams: Roscommon, Mayo and Galway. I just think the way the structure is at the moment, it’s very unrealistic to expect a Division Four county to do those sorts of things in the summer.

“It’s hard to know what the right solution is either. We’re all ambitious, we all want to play the top teams but Division Four teams have taken a lot of hammerings over the years. The reality is that when the league is over, the amount of hope those teams have is very limited each summer.

“Personally, I’d like to be involved in something that I have a real and proper chance in but I accept that everyone has their different opinions on it.”