Former Dublin star, now aiding the Premier cause, believes Munster breakthrough can be a turning point in the county’s football story 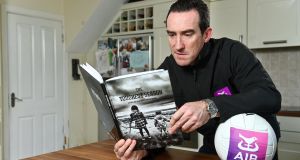 Paddy Christie: “What I’ve also seen, and that comes back to the Ballymun connection with me, are a lot of parallels . . . in the core things, under-achievers maybe, not high profile, difficulties in different areas, small pool of players.” Photograph: Sam Barnes/Sportsfile

Paddy Christie is smiling mischievously as he lists off some parallels between Ballymun Kickhams and Tipperary football. A world apart in the socio-economic sense, perhaps, only Christie is now eminently qualified to pass judgement on both.

Having played a key coaching role in Ballymun’s revival to win the Dublin football title in 2012, their first in 27 years, Christie was this year asked in to help coach the Tipperary football team, under manager David Power; a first Munster title since 1935 later, they’re now eying up Mayo in Sunday’s All-Ireland semi-final.

With his mother hailing from the hurling stronghold of Lorrha in north Tipperary (his father, incidentally, from Rathmolyon in Meath), Christie admits he always had a soft spot for the county. Once he answered Power’s call he also recognised that bit of Ballymun.

“That definitely has a lot to do with my involvement,” he says. “My mother being from north Tipp, a hurling stronghold, when they saw me down there with a football, when I was 14 15, they used to say ‘who’s the guy with the football?’

“But I always had a thing for Tipp anyway, enjoyed watching the footballers, spending my summers down there. And I saw too they had potential, had players, getting to the 2016 All-Ireland semi-final, so that was the main selling point David made to me, that there was something there to work with, It mightn’t happen straightaway, he said, and funnily enough it did, winning a Munster championship in the first year.

“But that was the other big thing for me, to help someone get up another level or two. Like with Ballymun, when we were such a mess at underage, the club was folding nearly. Tipp weren’t in that category, but still there was an element or could I do something small, that really was the luring for me, to help them push on to another level.”

Principal at Kilcoskan NS at The Ward in North Dublin, and still actively involved with Gaelic games at DCU (he led them to Sigerson Cup success in January), Christie also believes Tipperary’s breakthrough this year, like Ballymun in 2012 (they won back the Dublin title this year) marks a bigger turning point.

“I’d like to think some of the younger players will take to football, in a hurling county, and that football in Tipperary continues to make progress. Because what I’ve also seen, and that comes back to the Ballymun connection with me, are a lot of parallels. And I know you might laugh at that, and the big socio-economic difference that is there. But in the core things, under-achievers maybe, not high profile, difficulties in different areas, small pool of players, really.

“With a lot of those things, Ballymun were the very same, and things changed, the culture changed, and that’s what you’d like to see happening. Players from the outside looking to get into the panel, as opposed to even being asked, and it being a big privilege to get in there. Maybe that wasn’t there in the past”

Christie’s experience as a Dublin footballer offer another parallel; he went several years before winning his first Leinster title in 2002, also named All Star full back that year, winning two more in 2005 and 2006, and sees how Tipperary players have handled their breakthrough.

“I was very impressed, the first session back last week. I remember when we won a Leinster championship in 2002, and you’d be thinking ‘big deal for Dublin’, but in 2002, we’d lost three in a row, everyone was trying to keep a lid on things, because we’d just gone nuts, laughing and fooling around, and it was very hard to get back into the real world. What impressed me about Tipp, last week, was that they’re quite mature about it. Needless to say they enjoyed it, but overall it was back to business very quick”

Dublin, meanwhile, waltzed to their 10th Leinster title, only Christie is not buying the argument that’s all down to money: “One thing I would say, in the general sense, the amount of voluntary work in Dublin should not be overlooked. Obviously Dublin are heavily funded, but to me that takes from the psyche that’s gone around Dublin.

“I would have seen a lot of the things that went on with Dublin GAA, both as a player and coach, and I think it’s just a cheap excuse just to say Dublin have more money. When Dublin were going poor, everyone was saying the GAA need to do something about. Now that it’s done, it’s probably done too well. But the work that’s done voluntary, that’s nothing to do with funding.”

Paddy Christie was speaking at the launch of AIB’s The Toughest Season, a new photobook telling the story of how Gaelic Games communities coped during the pandemic season 2020.