‘When we started to haemorrhage scores, we couldn’t arrest it’ 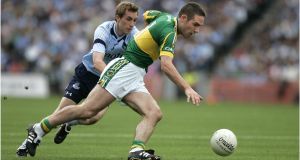 Paul Griffin in action against Declan O’Sullivan during the 2009 All-Ireland quarter-final. “Individually we were quite strong but they [Kerry and Tyrone] were better teams.” Photographer: Dara Mac Dónaill

There are several theories behind Dublin’s current football dominance – population, funding, resources, coaching, etc – but we shouldn’t forget the startled earwigs. Without them Dublin may never have become the force they are now.

It’s just 10 summers since then Dublin manager Pat Gilroy called on that description after their 2009 All-Ireland quarter-final performance against Kerry. Ever seen a startled earwig? You know when you lift a rock and that little brown insect runs around aimlessly in every direction, not sure where he’s going, but just knowing he’s probably a goner.

Unusually, Dublin were actually favourites for that game, as they once again tore strips through the Leinster championship, while Kerry sort of limped through the qualifiers. Still the startling began early: Colm “Gooch” Cooper glided in after Mike McCarthy’s blistering exchange with Darran O’Sullivan, shifting onto his left and steered the ball into the net with less than 40 seconds on the clock.

By the end, Kerry had hit them with 1-24, winning by a monstrous 17-point margin. It was felt that Dublin didn’t just get a fright; this was something that could haunt them for the rest of the playing lives.

“I think the big factor was that we seemed to be like startled earwigs in the first 15 minutes, all over the pitch,” said Gilroy, sitting in the Croke Park press room, one hand over his face, and the other possibly trying to pinch himself just to prove all this wasn’t actually happening.

“I think nerves got to us, in a lot of positions. We were behind for everything, everywhere. There were so many changes we could have made, because we were just getting killed everywhere.”

Then Dublin captain Paul Griffin was in one of those positions, starting at right half back; there were further lessons, including the 2010 Leinster semi-final when Meath hit Dublin with 5-9. Yet Griffin admits some of the shock and awe of that 2009 quarter-final ultimately helped turn Dublin into All-Ireland champions by 2011. The rest is championship history.

“The challenge for that group, in comparison to now, was the ability to control the tempo of games,” says Griffin. “That kind of thing was really difficult. If we were going to play on the front foot, were going to dominate around the middle sector, we could go toe-to-toe with most teams.

“What we couldn’t do, if that wasn’t the way it was playing out, we’d no flexibility to play a different way. Similar to Mayo maybe [in the second half against Dublin in the All-Ireland semi-final]. When we started to haemorrhage scores, we couldn’t arrest it. Once the floodgates opened, we could become very porous for a long period of time, and you leave yourself too open when coming back.

“On the back of that, it was about making sure we had a more robust plan or system, to make sure you were going to stay in games, and back yourself to come out when it got tighter, and wouldn’t let games get away from you.

“And that’s carried through. Obviously that got us over the line in 2011, it was the next step, and Jim Gavin would have carried forward a very similar style in 2013, and 2014, when they got beaten, was that one year when they didn’t quite have that same balance, and it was only 20 minutes, against Donegal, but the game went away from them, because they just can’t control it.”

Not that Gilroy or Griffin didn’t try to fix it at the time: “There were a lot things tried. We made subs reasonably early, made positional changes, but just couldn’t get ourselves up the field to take a bit of the sting or heat out of it.

“You’re aware it’s going away from you as well, and your whole year hinges on these performances, and it’s difficult at the time. But footballers are always very resilient. Defeats are tough at the time, but a new season comes rounds pretty quick, and the expectation and optimism takes over as well. Once you can take the lessons and move forward.

“I started on Donnacha Walsh, and after 12 or 15 minutes, went into full back, on Declan O’Sullivan. Denis Bastick started full back, Paddy Andrews corner back. The year after, Rory O’Carroll came in, and Mick Fitzsimons, maybe not horses for courses, but playing maybe to true skill sets.

“And if you’re going to be a defender, you first have to be comfortable with defending, one on one, and with Ger Brennan coming in at centre back, it offered a wee bit more protection, structure, so if we didn’t have the ball, we weren’t quite as open.

“Again if you look at the development now, Stephen Cluxton’s kick-outs, how the back eight work to get that ball away, their movement as a group is so good, whereas back then we would still have reverted to going long, and that makes it more difficult to take the sting out of things.

“We were slower to address things, and maybe the baggage of defeat from not finishing out close games, and then you’re playing Kerry, Tyrone, two standout groups at the time, better teams then. Individually we were quite strong, but they were better teams.”