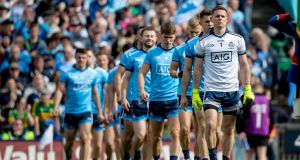 Faced by at times kamikaze pressing, he still managed to find kick-out targets even if some inevitably got picked off; made two spectacular saves – even if too quick off his line for penalty – to prevent goals and managed his defence with calm authority. Gold standard.

In what has been a foundation year as an indisputable starter, he maintained for the most part the standards of the summer. Mobile and involved in transitioning from the back, he will though have nightmares about fumbling possession in lead-up to Kerry’s key goal.

Ended up unusually exposed in the early entanglements with David Clifford and after getting called out on serial fouling, was red carded. Pitfalls of defending “on the edge”. Would be better suited to a sweeper role in Cian O’Sullivan’s absence.

Another uber-dependable outing for the defence’s great survivor. Given Red Adair duties after Cooper’s dismissal, he did all he could to restrict Clifford in the second and apart from getting turned inside out for one point, succeeded. Also made really well-judged runs forward.

His coming foretold in a 1964 Beano edition, he gave it the full Billy Whizz, assisted by Kerry’s uncertainty in coping. MOTM 1-3 from play but defensive stats were also off the charts with eight dispossessions. Expect Kerry to pay more attention this time.

Slightly distracted the last day, his early intervention did however save a goal on the line. Picked up Tommy Walsh and struggled a bit but his energy in the dramatic final phase played a part in Dublin taking control. Could well be reshuffled to centrefield.

Did reasonably well to curb his impulsive nature when the team were down to 14 and he was on a yellow. Did a good marking job on Stephen O’Brien and pushed up but kicked a bad wide. Picked up an injury, which threatens his involvement.

Was again countered effectively by Kerry centrefield collective, a nagging he’ll want to address, crowding the middle and blocking him as a kick-out target. Space denied to him created opportunity elsewhere but the inability to get Fenton onto attacking ball weakened the Dublin threat.

Considered first in line when potential changes are mentioned, his strength was an asset in the claustrophobic exchanges but his diminished mobility was also exposed. May be more effectively deployed off the bench when match has loosened and his force-field carrying can do damage.

A focus of discontent after the draw and bandied about as replaceable, a view that overestimates his deficiencies on the day and underestimates his credit in the bank. Perfect hand-pass for McCaffrey goal. Pace and work rate undimmed. Will be aware of need to improve.

Last year he revisited his under-age days as a shooter and ended up the championship’s top scorer from play. More withdrawn this season and under the radar for much of the draw, he stepped right up in the last 10 minutes to conduct the orchestra.

Exceptional display by the youngest player on the team. With Fenton decommissioned, he became a beacon in the turmoil and Cluxton’s go-to outlet and made the catch that started the goal. Worked back indefatigably in the early stages and, later, knitted together attacks.

Along with Fenton, he was the counter-play that will have best pleased Kerry. It can be forgotten that he nailed two early points but Tadhg Morley kept him under wraps thereafter – a typical shot from the wing tailing wide looked more desperate than ambitious.

Got tarred a bit with the big brush but he won virtually everything that came his way. Well shepherded in possession, on one advantage he still nearly broke through for goal, instead picking up the free – one of four converted that he earned the team.

His impressive record in finals was expanded, as Dublin’s top scoring forward, two weeks ago. Free at the end made even more difficult by imperative to ensure the ball went dead. Helped cover the missing man by also showing for restarts. Fine performance.

OTHER PLAYERS USED THIS CHAMPIONSHIP