GAA clears the way for grounds to hold Masters football 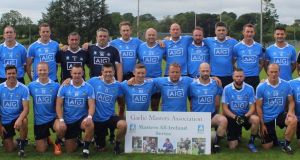 The Dublin Masters team. The 2018 Masters competition culminated in September when Dublin beat Tyrone 1-14 to 1-12 in the final

The GAA’s Management Committee has cleared the way for all club and county grounds to facilitate the playing of Masters football – the over-40s grade of the game previously unsanctioned to use such grounds.

It represents significant progress for the Gaelic Masters Association (GMA), who remain an autonomous body but represents one of the fastest growing sectors of the GAA. The 2018 competition, which involved 16 counties, culminated in September when Dublin beat Tyrone in the final 1-14 to 1-12, a game which involved several former senior intercounty players.

For 20 years the GAA officially sanctioned and ran a Masters competition, before disbanding it in 2009, citing rising insurance costs and cases of indiscipline.

Sine then Mayo native John Pat Sheridan twice brought motions to congress to revive it, in 2010 and 2011, and both failed. He then set up the GMA, beginning with five counties, and last year that was up to 13. Clare, Down and Dublin all rejoined for 2018.

However, the GMA were unable to use any club or county grounds without fear of repercussion. Some county boards were more flexible than others, but in most instances teams were restricted to community pitches for training and matches.

The GMA and the GAA had been negotiating guidelines in relation to the use of GAA vested property over the last number of months. These have now been approved by the Management Committee, the details of which were circulated to all county board secretaries this week.

According to the memo, “the GMA have now put in place the insurance cover required to allow them to use GAA facilities if clubs and counties wish to make them available for Masters games”.

“However, those involved are generally either current or former members of the GAA, and have in many cases contributed greatly to the development and well-being of clubs, counties and the broader GAA. in that context, and on foot of the agreement finalised by An Coiste Bainistíochta (Management Committee), we would encourage clubs or counties to make their facilities available to the GMA if free and convenient. The provision of facilities by a club to the GMA does not require any further permission from their county board/provincial council or Croke Park.”

The GAA had cited rising insurance as the main reason for pulling the plug on the Masters game. However, discussions with the GMA were opened by Fergal McGill, the GAA’s director of games administration, and agreement on that matter has now been reached. Both sides also recognise the important social aspect of the game, especially for players coming off years of senior commitment.

This year each of the Dublin players put €50 into an insurance fund in order to represent their county, and in London players put £300 up front to cover the costs of travel over the summer.

The Dublin Masters team were managed by Val Andrews, who previously managed the Dublin junior team and also the Louth and Cavan seniors. For experience on the field the team had former county standouts Ray Cosgrove, Shane Ryan and Peadar Andrews, plus club stalwarts Mick O’Keeffe, Ian Clarke and John McNally – all backed up by Dublin headline sponsors AIG.

The GMA operates on a strictly voluntary basis (there are no expenses or mileage for any of the teams, although referees are paid). It is also looking at a Sevens game to help encourage more players, or maybe dropping it to under-38 to get more counties involved such as Kerry and Cork.

Starting back in May, the 16 counties that competed for the 2018 Masters championship were Dublin, Cavan, Westmeath, Galway, Monaghan, London, Kildare, Mayo, Sligo, Down, Clare, Tyrone, Donegal, Roscommon, Leitrim/Longford and Antrim.

Open to all players over the age of 40 (this year, for instance, anyone born in 1978 or before), the game is played under regular GAA rules with select modifications, including unlimited substitutions.