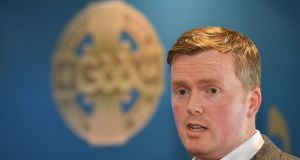 David Hassan: “If the basis of Gaelic football is catching and kicking, then if we’re moving in that direction that’s to be welcomed.” Photograph: Seb Daly/Sportsfile

David Hassan isn’t part of the Twitterati, nor does he have a Facebook profile, but the former Derry dual player has an idea of what’s being said about him.

As the chairman of the standing committee on the playing rules, the group that drew up football’s new experimental rules, he has come into the cross hairs of those who are against the changes.

Much of their angst relates to the committee’s new rule limiting consecutive hand-passes to three.

“I don’t have a social media presence but I understand, I hear, and I know that of course there’s going to be responses to it,” said Hassan.

“But I would make one point; many of the people commenting were either playing for teams or managing teams in 2011. Now there’s no particular significance to 2011 I should say, it just so happens that that’s where the data stats we’re working off begin.

“But almost nine times out of 10, a hand-passing sequence in 2011 lasted no more than three consecutive hand-passes. In other words, there was no need at that point to restrict it in number.

“So the people who may have a difficulty with that figure could usefully reflect upon the fact that that was the situation only a small number of years ago. So to some extent we’re only just moving back to a situation where there was no need for a rule in that regard.”

Hassan, who stood over the committee’s work at a press briefing yesterday in advance of the introduction of the new rules on Saturday week, when Leinster’s O’Byrne Cup begins, revealed several more intriguing statistics that he feels backs up their case.

He pointed to the rise of the average number of hand-passes per championship game from 251 in 2011 to 359 this year and the corresponding drop in kick-passing from 127 per game in 2011 to 110. The prediction is that if this trend continues the figure will drop to between 90 and 95 kick-passes by 2024.

“Obviously, by virtue of restricting the hand-pass, we will see an increase in kicking of the ball,” said Hassan. “Again, these things are subject to discussion but if the basis of Gaelic football is catching and kicking, then if we’re moving in that direction that’s to be welcomed.”

The other changes are the introduction of the sin bin, a decree that virtually all sideline kicks travel forward, an advanced mark for forwards who catch the ball cleanly close to goal and a direction that all kick-outs must be taken from the 20-metre line.

Inter-county managers Andy McEntee, Turlough O’Brien and Wayne Kierans have claimed that the amount of experimentation is simply too vast to be undertaken in an important competition like the National League which, according to Meath’s McEntee, will be reduced to “a bit of an experiment”.

“I think there’s 162 games in the trial period and our aim now will be to identify at minimum 25 per cent of those games that will be subject to quite detailed analysis.”

Allied to the extension of the mark rule, Hassan appreciates that some critics will claim that the game of football is moving away from its traditional skill set and perhaps towards the Australian Rules model.

“I understand that argument,” he said.

“The information we were receiving was that that was almost being written out of the game so we had to look at ways in which we could incentivise longer kicking, particularly into the forward line and that’s what we came up with.”

GAA president John Horan said he will meet with the Gaelic Players Association who are concerned about the amount of experimentation taking place during the National League.

But Horan noted that Central Council “have made a decision” and are “unlikely to turn around and make an immediate change to decisions they have adopted”.

Meanwhile, the GAA’s Master Fixtures schedule for 2019 has been confirmed with the All-Ireland senior hurling and football finals pencilled in for August 18th and September 1st respectively.