Tyrone continue to renew inspiration from the past 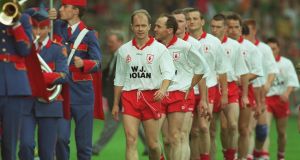 Peter Canavan: retained an unshakeable belief that he would win an All-Ireland for Tyrone. He led the county to success in 2003 and won a second medal in 2005. Photograph: Billy Stickland/Inpho

Tyrone’s All-Ireland semi-final against Kerry on Sunday is the latest contest in a rivalry spanning four decades, every one of which has seen the Ulster county in a final.

There is agreement across the generations that the early challenges inspired the 2000s when Tyrone won three championships and the links can still be seen. Feargal Logan played in the 1995 final against Dublin and along with the two men who lifted the Sam Maguire for the county, Peter Canavan and Brian Dooher as selectors, managed the county to the All-Ireland under-21 title in 2015.

“Management is simple – you’re simply as good as your players,” he says. “That’s it in a nutshell. I had that group at under-17 and in fairness you knew there was quality there. Once we got them up the chain, as Dooher used to say to me, ‘who would you swap?’ We would have said in those days that we’d be surprised if 10 of those boys don’t go and do it.”

Eight of them were on the panel for last year’s senior All-Ireland final against Dublin.

Art McRory managed the first two teams from the county to make the big day in September in 1986 and ’95. They famously opened up a big lead on Mick O’Dwyer’s Kerry the first year before falling away, a disappointment he puts down to a couple of factors.

“The Kerry team we played were an old team on their final hurrah but we simply hadn’t the experience to take advantage and that was about the height of it,” he says.

“What really cost us that match was a) Eugene McKenna was carrying an Achilles injury and couldn’t train for the match beyond sitting on a bicycle. The tendon went and he had to go [after 56 minutes] and b) John Lynch, who was marking Mikey Sheehy cracked a bone in his leg and effectively played the second half with it broken. Those two injuries were vital to us.”

He remained optimistic about the county’s prospects in the years to come and saw, in the two finals, great events that would impact on coming generations.

“I felt the ’86 final did inspire an awful lot of youngsters in the clubs and help to raise the standard. Then the ’95 final added to it with [Peter] Canavan in particular – this wee man, who didn’t even look like an athlete but who made the thing look so easy. Everything he did was the right thing – the simple thing but the right thing.

“I did feel that the All-Irelands would start to roll – that we’d get one; now I didn’t necessarily think that we’d get three in 10 years but I was sure that one was coming along.”

Logan identifies the same influence. As a team-mate of Canavan, he was aware of his contribution to the team but also his unshakeable belief even after the disappointment of 1995 when Dublin beat them by a point and Canavan scored all but one of Tyrone’s total.

“Remember it was dog eat dog in those days. Ulster was extremely competitive – the previous four All-Ireland winners were in the province – so while you were confident, you knew the whole thing was laced with danger but you felt Tyrone football was definitely building and in fairness, Art and the ’86 boys started it.

“We built it on a wee bit further but we had a superhuman footballer in Peter Canavan and a lot was based on that because he was outrageously good, from the age of about 17.

“I played my last game in Parnell Park against Ciarán Whelan – a 400 metre athlete! – and I walked to the dugout and said, ‘that’s me done. I’ll not play for Tyrone again’. Peter tried to talk me out of it and said, at a time when his own career was taking a comparative dip: ‘I’m going to win an All-Ireland and you might as well be there as well.

“So, was there a perception that Tyrone could get there? Certainly there was one believer, anyway.”

Both are optimistic for the future although not exclusively on the basis of this year. Logan has a nagging concern about the firepower of the attack but not to the point where he entertains major doubt.

“I would be confident that we’ll come again but we need more clinical forwards.”

McRory is however emphatic because of the quality coming through.

“Yes. I would have no doubt because of the structure in the county. I spoke to Barney McAleenan who had UUJ for three or four years. He was saying that Seán O’Neill [the great Down All-Ireland winner from the 1960s] had asked him about how Down players were going and that they sat down and went through the panels and that all the good players were from Tyrone!”