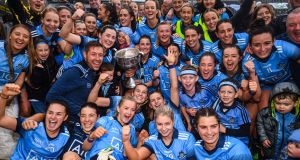 After the weekend that was in it, when the men and women of Dublin completed a combined eight-in-a-row, it would be fair to conclude that Gaelic football in the capital isn’t just alive, alive, oh, it’s booming. If this keeps up, the Sam Maguire and Brendan Martin trophies will be awarded permanent residency.

On Saturday evening, Stephen Cluxton went where no man had gone before, up the steps of the Hogan Stand to collect Sam for the fifth year running after Dublin had seen off Kerry in their replay. And come Sunday afternoon, Sinéad Aherne made the same trip to raise Brendan for the third successive year following a five-point victory over Galway.

Aherne was part of the first Dublin team to win a senior All-Ireland back in 2010 and on that day a crowd of 21,750 attended the final. If you want a notion of how far the women’s game has come since then, just gaze at the attendance for the 2019 final: 56,114, a 5,973 increase on the previous record, which was set last year. At this rate they’ll have Croke Park packed to the rafters soon enough.

While the first half of the men’s final was as pretty as a picture, up there with the best anyone could remember, the women’s contest was more paint-by-numbers than Picasso, the teams only managing a score each before the break. The conditions didn’t help, mind, Saturday using up the weekend allocation of sunshine, not a spot of blue to be seen in the sky above a dank Croke Park come Sunday.

But come full-time, the ribbons on the cup were blue, which was all that concerned Aherne and co, Dublin completing their journey from being the “nearly team” that was put to the sword by Cork three years running, before establishing themselves as the standard bearers of the women’s game. By their own admission, there was a time they didn’t know how to win on those big days. Now, they have the look of a team that has forgotten how to lose.

Which, of course, can be said too of Jim Gavin’s men, the first in history to do the five-in-a-row, Kerry having come closest to achieving the feat back in 1982 until they were Séamus Darby-ised. The Dublin women still have some distance to travel before they enter the history books, Kerry winning just the nine in a row up to 1990. They’re a third of the way there, though.