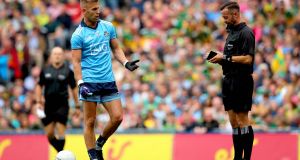 Referee David Gough with Jonny Cooper of Dublin during the All-Ireland final against Kerry. Cooper was sent off. Photograph: Ryan Byrne/Inpho

All-Ireland football referee David Gough has questioned to what extent the sending-off of Jonny Cooper in last September’s drawn final was justified by the nature of his conduct.

In a wide-ranging assessment of the playing rules delivered at Saturday’s annual GAA Games Development Conference in Croke Park and expanded on with this newspaper, the Meath official explained how, under the current rules, the red card shown to the Dublin defender was correctly administered for three ‘ticking’ or ‘noting’ offences but queried whether it was a proportionate response.

The remarks were initially made during Saturday’s presentation by Gough and David Hassan, chair of the standing committee on the playing rules.

Titled, ‘Making playing rules easy to read, remember and apply,’ it confirmed that significant proposals for change in how the GAA treats foul play are being drafted.

Hassan in his introduction, said that the rules committee (SCPR) was attempting to “make rules easier to understand and implement” and “to create conditions in which it no longer pays to foul”.

He pointed out that the current playing rules were drafted 35 years ago and that they were overdue simplification or rationalising.

In his own words, the committee wasn’t looking to “rewrite” but “edit” the playing rules of football and hurling along the lines of ‘classification’ rather than ‘categorisation’ – which he accepted mightn’t sound very different but that the latter would be a broader heading than the current regulatory framework.

During his presentation, Gough compared the red card issued to Kilkenny hurler Richie Hogan for a head-high challenge on Cathal Barrett – an infraction assessed as ‘dangerous’ or ‘reckless’ play – with that given to Cooper for repeated fouling.

Asked on Monday was it not desirable that serial fouling needed to be deterred he agreed.

“Absolutely but it would be looking at a sinbin option [the recently-introduced punishment for a black card]. I’m sure that if three ‘notings’ were punished by the sinbin, a player would have the opportunity to go off, calm down and think about what he’s doing before coming back onto the field of play.

“If it happens again, obviously he goes off for good but I’m not sure the punishment was proportionate in Jonny Cooper’s case in the same way as when Richie Hogan was sent off in the hurling final for a head-high challenge.”

He also supported Hassan’s arguments to streamline the rule book and agreed with his distinction between classified and categorised fouls, outlining the benefit of the former approach compared with the current need to label all infractions by reference to 43 different rules.

“For example: ‘to body collide with an opponent for the purpose of taking him out of the field if play’ – so you have to have a collision and you have to deem that it’s taking the player out of a movement on the field of play.

“Ideally we shouldn’t be trying to fit incidents of foul play into one of 43 different rules. We just need to distinguish between rough, cynical and dangerous. A lot of fouls at the moment are cynical but don’t fit into the current category.

“A player plays the ball off and goes for a return pass when bearing down on goal. He’s held by the jersey so he can’t get a scoring opportunity but we can only give that as a ‘noting’ offence because it’s not a deliberate pull-down so it’s not covered by the black card.

“There’s any number of cynical fouls occurring at the moment but we can’t give a black card because the language of the rules is so prescriptive.”

Speaking from a personal point of view, he advocated additional sanction for any cynical play that takes place within 20 metres of the goal and intended to prevent an attacking player from creating a goalscoring opportunity.

“I may be the only one still banging on about this but I still have an issue with denying a team or player a scoring opportunity, particularly within the 30- or 20-metre line. Awarding a black card and free kick isn’t adequate. The scoring opportunity should be given back; otherwise it still pays to foul.

“If you were to say that a black card within the 20-metre line results in being ordered off the field and a penalty, we’re not going to see as many incidents of deliberate pull-downs, deliberate trips or body collides intended to stop scoring opportunities. We’re at a stage now in inter-county football that it’s ‘win at all costs’ – doing whatever you need to do, regardless of rules, to ensure your team wins.

“The GAA needs to counter this by saying that we equally will do anything we need to do, through the rules, to make sure that it doesn’t pay to foul.”

Also on the horizon are moves to deal with cynical play in hurling. When football’s black card was introduced six years ago, hurling was exempted from the sanction because the same problem was deemed not to exist.

On Saturday, David Hassan revealed that match research by the SCPR had indicated that the level of cynical fouling in hurling was at least as high as in football – if not higher, now that the deterrent of the black card had been introduced to the latter game.

Any proposals on the matter are not expected before this year’s annual congress in February but will have to be passed at some stage and there would be a high probability that any moves to extend the black card would meet resistance from hurling counties.