Darragh Ó Sé: Everything before the Super Eights is shadow boxing 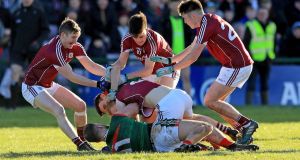 The Galway V Mayo match at the weekend is unlikely to be the earth-shattering event everyone is making it out to be. Photograph: Donall Farmer/Inpho

The old saying about the championship not starting until the quarter-finals has never been more true than this year. Even with Mayo and Galway playing on Sunday, it must be in their heads that whatever the result, all that matters is being at the starting line in the middle of July. You have one job – get through the first two months and arrive at the last eight in the shape you need to be.

Winning your province now is about getting a short-cut to the Super Eights and not a whole lot more. That’s the long and short of it. When the end of the year comes and all the assessments are made, you won’t be able to smooth over a bad performance in the Super Eights by pointing to your provincial title. Performing there is the be-all and end-all for all the best teams from here on out.

I think it’s a fine change. I know people will give out but those same people gave out about the qualifiers when they came in and, if all came to all, they’d have us back in the days where you trained for nine months for one game. It’s like the old story about the American tourists who came across a Cork team running up sand dunes on a beach in November. “When’s the big game, guys?” they asked, as the lads were there bent double with their hands on their knees. “Next June!” came the reply.

Down here in Kerry, I’d say there’s quite a few fellas who could do without the system changing. We’re big supporters of any system that we win in. Playing quarter-finals against a team coming up through the qualifiers has historically been no big hardship for Kerry, let’s put it that way.

But we won’t complain. Or at least we won’t complain until we find ourselves in trouble in it. You would often hear in Kerry that there is a way to win and a way to lose – well, there is also a way to complain. And so when we do complain – if we have to, regrettably – we will complain out of a high-minded concern for others. The relentless pressure on those involved, the need for player welfare and so on. Kerry will look out for ye, lads. Don’t worry about that.

Managers getting ready for the Super Eights are going to have to be like Aidan O’Brien. It’s going to be a matter of having your horses wound up and primed for the day that matters. I know people are making a big deal out of Galway playing Mayo on Sunday but it’s still only a Connacht quarter-final. It would be handy to win it and take the lift rather than the stairs. But I’d be confident they’ll both be there when the really serious stuff starts. That’s what they’re both aiming at.

There’s no point being a hero for a provincial game anymore. Nobody will thank you for it or even remember it come July

It’s what everyone is aiming at. In Kerry, the approach this year has been totally different to 2017. Last year, they threw everything at the league and beat Dublin in the final but weren’t able to carry any bit of that form through to the summer. Their best performance in the championship was the Munster final against Cork but even that turned out not to be worth a whole pile.

They were okay against Galway and poor against Mayo – twice. They were very average as they went along and a few fellas lost form. By the end, you were looking at them and wondering how they beat Dublin in the first place. So much for a league title.

This time around, it’s been the opposite. The league was hit and miss and there were so many injuries and so many fellas trying to find form. Kerry played a lot of young guys and it meant there was a lot of pressure on them from the start. The injuries probably forced it on them to a certain extent but it wasn’t ideal.

There’s nothing wrong with playing young lads in the right situation. Con O’Callaghan made a huge impact for Dublin last year but look at the forward line he was coming into. For his first game, the other five forwards were Diarmuid Connolly, Ciarán Kilkenny, Paul Mannion, Kevin McManamon and Dean Rock. For the All-Ireland final, he had Eoghan O’Gara and Paddy Andrews there. Go back and watch his goal in that game and you’ll see the little body check O’Gara gives Colm Boyle and the decoy runs Andrews and Rock make to take their markers away from goal. O’Callaghan scored the goal but experience made it.

For Kerry now, the likes of David Clifford, Seán O’Shea and Micheál Burns and are being thrown into a situation where they’re not only being asked to play, they’re being asked to lead. That’s tough on guys who are either still in their teens or not long out of them. It’s possible that Kerry could start Clifford, Burns and O’Shea together in the championship. And maybe Jason Foley and Tom O’Sullivan too.

That’s a lot of inexperience to be throwing in all at the one time. I wouldn’t be worried about whether or not they’re up to playing inter-county, I would just rather they had a group of older lads around them to see them through it. When Colm Cooper came on board back in 2002, we were experienced and primed and ready to add him as another piece of the jigsaw. That’s not the case here.

The upside for Kerry is that they have a big squad now. Even though last year’s team didn’t put up a great show, they were still a kick of a ball away from an All-Ireland final. You have a panel made up of those guys and fresh blood coming in to make them up their game. That’s not a bad combination.

Most of all, it means that they are set up for the demands of the Super Eights and beyond. To make an All-Ireland final, you will have to play three Super Eights games in four weekends and then follow up possibly six days later with an All-Ireland semi-final. Making do with your first-choice 15 and the usual four or five lads you can trust off the bench isn’t going to cut it. You are going to need serious contributions from your 23rd and 24th men – not just five or 10 minutes here and there.

That’s what the Super Eights is going to mean. The teams with the deepest panels are the ones who are going to survive the longest. That’s why I look at a team like Monaghan, who can mix it with the best when they have to, and worry about what sort of shape they’ll be in by the time they get to the third game. I know they’ve used a fair few players themselves through the league but are they going to rely on them when it comes right down to it? It would be a big change for them if they do.

If you’re a player, it’s probably hard to know what to think of it. It’s going to need a change in mentality, that’s for sure. You would want to be feeling fairly fresh sitting here at the start of May, for one thing. If you have a niggle, now’s the time to rest it and rehab it and get it right. There’s no point being a hero for a provincial game anymore. Nobody will thank you for it or even remember it come July.

That’s why I’m not so sure this Mayo v Galway game is going to be such an earth-shattering event as everyone is making it out to be. Will Kevin Walsh or Stephen Rochford really be using too many fellas who are only moving at 80 or 90 per cent? Surely it’s way too early in the year for that kind of carry-on.

For what it’s worth, I fancy Galway on Sunday. Lee Keegan is a huge loss for Mayo. Even saying that, I wouldn’t be rushing Cillian O’Connor back if he isn’t right. Apart from the fact that Mayo are going to need him more later down the line, O’Connor is one of those players who gets cranky when things aren’t going his way. If he’s playing hurt, he’s less effective. If he’s less effective, he starts niggling. His sending off against Galway in the league was a long time coming and you could tell it was out of pure frustration. If he’s only 80 per cent for Sunday, I’d leave him be and tell him to get ready for mid-July.

That’s when the big players are going to be most needed. Everything before then is shadow boxing. Now, more than ever.