Aaron Connolly focused on under-21s and game against Sweden 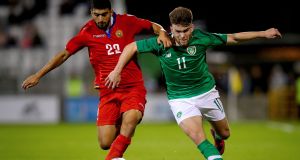 A run of games for Brighton could quickly mean a senior call up from Mick McCarthy, but for now Aaron Connolly insists that he is happy to be working with Stephen Kenny as part of an Irish under-21 side whose qualification prospects will be a little easier to gauge after Tuesday’s group game in Sweden.

The Irish made it six points from six by beating Armenia on Friday, when Connolly was one of those to really catch the eye.

The 19-year-old had an outstanding game out on the left wing from where he set up Troy Parrot’s match-winning goal superbly, and seems to have been one of a number of players to have impressed McCarthy, who was up in the stand looking on.

Given that Tuesday’s under-21 game is a competitive international while the senior game is a friendly, there was always an understanding that none of Kenny’s players would be drafted in for the Bulgaria game. However, Connolly knows he would be on McCarthy’s radar pretty quickly if he can maintain the momentum he has suddenly acquired at club level after starting in the League Cup then coming on against Manchester City in the Premier League.

“If it happens it happens,” he says when asked about the prospect. “But to be honest I am just focussed on the under-21s for the moment. It is enjoyable playing with a team like this; playing under a manager like that [Kenny] especially.

“You could see it there [on Friday in Tallaght]. I probably gave the ball away 10 or 12 times in that game and didn’t hear one thing from Stephen. He just gives you the freedom to express yourself as long as you work hard to get back in and recover the ball. And the times it does come off he praises you, it’s good, he gives you that freedom.”

It is a young under-21 squad but a potentially special one with the likes of Conor Masterson, Jayson Molumby and Parrot amongst those who are talked about as real prospects. Connolly is hopeful that they can go on to great things together.

“We all help each other out every day. There’s not a competitive feeling around the place. It’s just more like everyone encouraging each other to do better. So I’m happy with all of the boys, I’m proud of them all, and long may that continue.

“We are probably all thinking that he will go into the [senior] job next year, but for now we are just trying to produce our best for Stephen, to help him achieve what he wants with the 21s before going to the first team job.

“Hopefully we can all be a part of that. Hopefully he likes us and we can get this group back together but at senior international level.”

Becoming the first Irish team ever at this level to qualify for a European Championship would further enhance the reputations of both the manager and his players. Kenny and Co will be tested in the coming games, however, with Italy in Tallaght next up after Tuesday’s game in Kalmar.