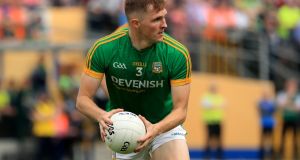 Meath’s Conor McGill: ‘People are feeding off each other and no one is afraid to put themselves in positions they wouldn’t normally be. It’s starting to pay dividends.’ Photograph: Donall Farmer/Inpho

Leitrim have deservedly attracted much of the weekend attention with a first promotion since 1990 – they were also upgraded to Division 1A in 1998 when the divisions were re-drawn – but another county that has spent a long time in the doldrums also made a move on Sunday.

Meath mightn’t have the football romance of Leitrim but for a comparatively recent powerhouse of the game, they edged closer to a promotion back to Division One for the first time since 2006 in what is the 20th anniversary of their most recent All-Ireland.

The weekend’s high drama in Navan saw Andy McEntee’s team earn an injury-time penalty, which was calmly put away by Barry Dardis to see off regular league and championship rivals Kildare by a solitary point – leaving them top of the Division Two table with two matches left, away to Clare before a finale against promotion rivals Fermanagh.

Full back Conor McGill was in the thick of it on Sunday, scrapping away in an excellent second-half defensive display that restricted their opponents to one point, from a free and in the late, late intervention, get up to play his part in creating the penalty. He says that the team is showing a consistency that might have been lacking in the past.

“Yeah, it’s hard not to enjoy it when you are winning. The group of lads in there at the moment have a great chemistry. Obviously we’re enjoying winning but even going down to training is different; it’s a laugh.

“I think it’s showing on Saturdays and Sundays when you know what kind of Meath are going to show up. We’re starting to show that consistency, which maybe we didn’t in other years. It’s my fifth year and it is enjoyable – people are feeding off each other and no one is afraid to put themselves in positions they wouldn’t normally be. It’s starting to pay dividends.”

It’s not just the players who are enjoying the promise of the season to date and it was noticeable how the Páirc Tailteann crowd became a player in the tense closing minutes of an exciting encounter – something that didn’t escape the players, either.

“Yeah. One hundred per cent,” according to McGill. “You’re definitely feeding off that. Not just the scores because we were hitting a few wides – more the turnovers, forwards tackling in their half and you could really feel the Meath fans and you can’t but get a lift from that.

“And I’m sure the Kildare boys could hear it as well, consciously or sub-consciously, and they were thinking, ‘we need another score’ but they weren’t getting it.”

It was Meath’s needed score that eventually materialised. McGill decided that desperate measures were needed and although he acknowledges that in five years he has yet to score for Meath, he understood that something needed to happen. His pursuit of the ball created a chance for Shane McEntee, who was fouled.

“We got a turnover and we’re always on about keeping the width so we’re two points down and in my head I’m thinking, ‘if we lose by two points, we might as well lose by three; a loss is a loss’. So, just go forward and it just happened that I saw Biggy (Graham Reilly) giving the call and he put the ball in and I happened to be there.

“There was space and I ran into it. I didn’t catch it but Shane was there following up and we got the penalty. We were behind and we’d nothing to lose at that stage so I made the run forward and made the option. Luckily, it came our way.”

It often does when you chase it.