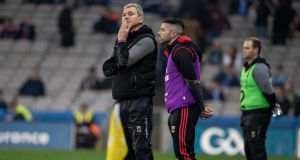 James Horan: the Mayo manager will be looking for a big improvement on last week’s display against Dublin when his side host Galway at McHale Park. Photograph: Morgan Treacy/Inpho

Tyrone v Cavan, Healy Park – Meeting of two teams with a first win of the season in their most recent outing. Cavan had lost 10 of their last 11 against Roscommon before turning the tables and this carries a similarly bleak history for them: no league win in the fixture since the format changed 11 seasons ago and none in championship for 36 years. Killian Clarke has been in excellent form for Mickey Graham’s team whereas Peter Harte has been driving Tyrone in their revival, which looks durable. Verdict: Tyrone

Mayo v Galway, MacHale Park, 7.15 [Live, eir sport 1] – There was grave disappointment at Mayo’s inability to make Dublin sweat a bit harder for the latest win and now Galway, grown insolent since James Horan’s previous stint, turn up not having lost the fixture for four years. Galway were hustled to defeat by Kerry and Mayo will have noted how pressure paid dividends on the slow build-up from the back. Injury also weakens the visitors with Shane Walsh the latest to fall. Great opportunity for Mayo to arrest one trend, at least.  Verdict: Mayo

Tipperary v Cork, Semple Stadium – An index of Cork’s perdition is the extent to which this has become a defining rivalry. The best bit of form between them has been Tipp’s defeat of Donegal but Cork’s hand has been strengthening with players returning to action. Liam Kearns though has Brian Fox available after a successful trip to the CHC. This is backs-to-the-wall stuff with the losers staring at relegation. Verdict: Cork

Donegal v Armagh, Ballybofey, 7.15 [Live, eir sport 2] – Donegal’s fall from expectation is a reflection on the first-choice players they are missing but defeat by Fermanagh followed a poor display. There’s more method and work-rate to Armagh at the moment but the Ulster champions have better in them than they have produced to date and the Gaoth Dobhair players are coming back.

Carlow v Louth, Netwatch Cullen Park – Carlow’s fine start has petered out but they’ll need to snap out of that with surprise leaders Louth coming to play and the home side’s defensive set-up will be sore tested by the league’s runaway top goal scorers. Verdict: Louth

Down v Offaly, Páirc Esler – More rumblings down in Offaly with last year’s top league scorer Nigel Dunne departing, unfortunately after registering a first win of the campaign. Down have regathered themselves after a bad start and now look like the promotion favourites they were at the start. Verdict: Down

Laois v Longford, O’Moore Park – Longford’s first setback, against Down, ironically coincided with the return of the Mullinalaghta players but also reports that Robbie Smyth had left the panel. They’ll need to arrest the trend here, which will be tricky because despite Laois’s mixed form, they look to have enough scoring power. Verdict: Laois

Limerick v Derry, Gaelic Grounds, 1.0 – Limerick came very close to spoiling Leitrim’s great start to the season and will throw the sink at the table toppers but Derry are carefully negotiating a way out. Verdict: Derry

Wicklow v Wexford, Aughrim, 2.0 – Desperate campaign for Wexford reached a nadir last week with a 17-point thumping at home by Waterford. This won’t be easy, either as Wicklow are pushing in third place. Verdict: Wicklow

Roscommon v Dublin, Dr Hyde Park [Live, TG4] – Dublin, still not clicking like a lighter, had more than enough for Mayo last week. They’ve yet to pick up any points on the road so far but Ciarán Kilkenny and Cian O’Sullivan returned last week and there were further encouraging displays for the depth charts by Darren Gavin at centrefield and Evan Comerford in goal. Anthony Cunningham must have been disappointed to lose the usually manageable Cavan and with some very poor shooting, leaky cover and Enda Smith well marked. Ultan Harney’s suspension also untimely. Verdict: Dublin

Kerry v Monaghan, Fitzgerald Stadium, 3.0 [Deferred, TG4] – Monaghan have had a good run against Kerry in the past couple of years but so far this season, the failure to build on the bright opening win over Dublin is haunting them. Even though Conor McManus was in fantastic form against Tyrone, taking no less a man marker than Pádraig Hampsey for three points, the team again struggled. Kerry are flying though. Seán O’Shea is the league’s top scorer and their energy levels are bristling even this early. Final place within reach with a win in this one. Verdict: Kerry

Meath v Kildare, Páirc Tailteann – A win here pushes Meath closer or Kildare back into the conversation. Although Andy McEntee had a couple of bad experiences against Kildare last year, Meath have momentum and a bench that has made a difference in matches to date. Kildare are still getting players back from injury and their need is more urgent after a sluggish start but their attack has also been less productive. Verdict: Meath

Fermanagh v Clare, Brewster Park – Fermanagh’s minimalist approach has been paying dividends with just one of only two unbeaten records in the top half of the league, along with Kerry, and the meanest defence in the whole competition. Clare are paddling in dangerous waters at the other end of the table but drew with Armagh on their previous trip north. Verdict: Fermanagh

Sligo v Westmeath, Collooney – Two frustrating campaigns, Sligo’s because after a long residency it leaves them four and zip with the trapdoor opening and Westmeath’s because the narrow defeat by Down is all that separates them from topping the table but they will be contenders. Verdict: Westmeath

Leitrim v London, Páirc Seán Mac Diarmada, 1.0 – Great opportunity for Leitrim to all but nail down promotion. Their improvement this season and progress in the campaign to date have been eye-catching. Top points scorers in the entire league, a fair reflection on an exciting attack in which Ryan O’Rourke, fourth-top scorer in the county, has excelled. London haven’t been operating at that level but are competitive. Verdict: Leitrim

Clare v Limerick, Cusack Park – The only county to beat the All-Ireland champions last year welcomes them back to the scene of the statistic. Limerick had the ambivalent blessing of a reality check last week with a first defeat in the league and need to be careful not to lose momentum even though they are through to the quarter-finals. Clare have had a patchy campaign, losing to Cork when they should have won and then being lucky to survive Wexford’s comeback last week. John Conlon’s injury is a blow that might tilt things. Verdict: Limerick

Cork v Tipperary, Páirc Uí Rinn [Deferred, TG4] – The only match with something substantive hanging on it, Tipp need to win to have any chance of making the play-offs. Last week’s defeat by Kilkenny was according to Liam Sheedy their worst display of the campaign and it showcased two current problems, a lack of pace and ambiguity over who should take the frees given Séamus Callanan’s erratic form. Cork have been missing players right, left and centre but are bouncing off a win over the All-Ireland champions. Still, there could be a Tipp backlash after three straight losses. Verdict: Tipperary

Wexford v Kilkenny, Innovate Wexford Park – Meetings between this pair have become their own small universe since David Fitzgerald arrived in Wexford. His team have had a robust campaign, showing good spirit in all matches. Kilkenny gave a signature performance in Thurles, sticking doggedly to the task and getting good displays from Tommy Walsh and Conor Delaney, especially, in the full-back line where their single-minded pursuit and blocks spoiled a few attacks. Both counties wiped Tipp’s eye in injury-time in recent weeks but Fitzgerald will be keen to wrest back some of the initiative lost in this rivalry last year. Verdict: Wexford

Carlow v Offaly, Netwatch Cullen Park – A shame in a way whoever loses: Carlow because they deserve great credit for the season they’ve put in at the top and Offaly because the plummeting decline of a once established hurling county is a matter of regret. Carlow though have greater merit. Verdict: Carlow

Dublin v Laois, Parnell Park – Great win for Dublin last week against Waterford sends Mattie Kenny’s side into this with a respectable eight points a likely outcome. Laois need something to avoid being passed out by Carlow and left with a relegation play-off. Verdict: Dublin

Waterford v Galway, Walsh Park – The counties’ first competitive match since the 2017 All-Ireland, it gives Waterford a shot at redemption but Galway, despite being short the St Thomas’s players and a couple of others have passed an incident-free campaign and cantered to a 100 per cent return, which they can maintain. Verdict: Galway

All-Ireland club camogie intermediate final Clonduff (Down) v Gaultier (Waterford), Croke Park, 1.30 – Two first-time finalists at intermediate with Gaultier looking to become only the second Waterford club after Lismore to win the title and Clonduff have the distinction of being the first club from Down to contest any All-Ireland above junior. Verdict: Gaultier