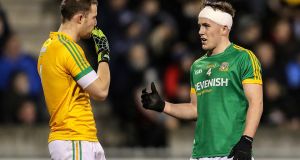 Meath goalkeeper Barry Dardis netted the penalty to give them a Division two victory over Kildare. Photo: Laszlo Geczo/Inpho

It was surreal but it was old-school. In the dying minutes of this fervid Allianz Football League Division Two encounter in Navan, Páirc Tailteann was rocking as the home support sensed that a match, which had spent most of its time dangling just out of reach, was suddenly within their grasp.

You could say that it was a championship atmosphere apart from the unseasonal intrusion of a thickening snowfall.

Five minutes of injury-time had been flagged and Meath had the margin down to two, 0-9 to 1-8, for the first time since the fourth minute. Graham Reilly’s long, hopeful ball came down on the Kildare goal where of all people, his corner back Conor McGill, having somehow got himself the length of the pitch, was waiting. The ball broke off him to Shane McEntee and he was tumbled by Keith Cribbin, who as a result saw out the match from the sin-bin.

Referee Derek O’Mahoney came charging through the snow, his arms spread wide and to Meath as welcome a sight in a blizzard as a husky pulling a sledge of supplies. Penalty.

Replacement Barry Dardis, who had missed one in the O’Byrne Cup shoot-out against Dublin in January, stepped forward. He hit it well towards the top left corner and it flew in despite a game attempt by Kildare goalkeeper, under-20 All-Ireland winner Aaron O’Neill making a first appearance off the bench for the injured Mark Donnellan.

There was time for further Kildare attacks but they met literally selfless resistance – another replacement, Niall Kane, breaking his arm getting in a brave block in the mayhem as the opponents desperately sought an equalizer.

It was a vital win for Meath, quickening their momentum towards promotion and a potential return to Division One for the first time since 2006.

The story of the contest, which broke Kildare’s good run in this fixture, was of Meath constantly trying but without enough accuracy to turn their second-half superiority into scores. The first half had been the visitors’ – sharper, more economical, 1-3 scored after seven minutes – and they led by five at half-time, 1-7 to 0-5.

Meath had been the opposite, squandering chances to keep the score within range, and labouring to create openings against Kildare’s fast-swarming defence. Kevin Feely was characteristically productive in the air, pulling down three marks and in attack, Neil Flynn and Ben McCormack were causing alarm, the latter smartly taking the goal in the seventh minute; his withdrawal with injury in the 25th minute coming as a blow to Cian O’Neill’s team.

Meath probed away. Cillian O’Sullivan put in a massive 70-minute effort, his mobility and ability to break tackles keeping the team going forward. Darragh Campion got into good positions and Ben Brennan finished well but too often, they over-elaborated, allowing the cover to re-set or shot poorly – six first-half wides out of 12 in total and three shots dropped short.

Even when Mick O’Grady was sin-binned in the 24th minute, Meath were outscored for the 10 minutes.

Manager Andy McEntee was asked had he been giving up with the amount of wides.

“No. I was okay, relatively. It’s a bit frustrating when you see good chances going a begging but I think the key for us was that we were trying to do the right thing and a good few of the shots – they weren’t bad options; they were just badly executed.”

The second half saw a change. Now facing the wind, Kildare didn’t get the same bounce from their re-starts and Meath competed more vigorously, disputing the ball if not taking clean possession themselves and outworking their opponents on breaking ball.

At the back, the defence benefited from the clamp-down on good-quality delivery into the Kildare attack and also tightened up on what did arrive. Donal Keogan was to the fore in managing the backs and reprocessing ball into attack but his fellow defenders were also very effective – to the point that they conceded just one point in the second half plus two shots that went wide.

The problem remained inaccuracy up front and few goal chances. O’Sullivan teed up raiding wing back Ronan Ryan in the 51st minute but his touch on the ball was kept out by Donnellan. Otherwise there was a litany of wides but Meath never lost heart and when O’Sullivan cut the margin to two in the 65th minute, the adrenaline levels surged.

“I think it was important that we played a certain way,” said McEntee. “In that regard, the missed chances, whilst you wouldn’t be happy with them, the way we were playing was the bit that pleased me all the way through. I thought we showed heart and guts and honesty all the way through.”

For Cian O’Neill it was another frustrating day and hope of promotion hangs by a thread at this stage.

“It’s very disappointing, the conditions didn’t help but one point in 35 minutes is obviously not good enough. It’s not that we didn’t create the chances – we really lacked composure into the second half. We were losing leaders obviously which is quite dramatic for us, losing Ben in the first half he was tearing it up for the first quarter so you are forced into a substitution.

“Then Eoin Doyle your captain goes off so you are forced into another and then –  how often do you see your keeper go off, so we were forced into three early substitutions which obviously weren’t part of any plan and that leaves you with very little fresh legs to bring in when we needed to push on.”