Former All Star fullback Rory O’Carroll has returned to Dublin 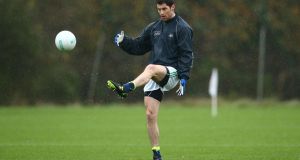 Rory O’Carroll during a training session at Carton House in 2015. Photograph: Cathal Noonan/Inpho

Former Dublin fullback Rory O’Carroll has returned to the capital from his lengthy sojourn in New Zealand.

The 29-year-old last played for Dublin in the 2015 All-Ireland final. The two-time All Star and three-time All-Ireland winner left for New Zealand in 2016. O’Carroll flew back to Ireland over the weekend and is expected to return to club football and hurling with Kilmacud Crokes.

The UCD graduate previously returned to the Dublin squad (and team) for the 2011 season after studying in France from the autumn of 2010 until early summer 2011.

In recent seasons Paul Mannion and Jack McCaffrey have returned to Jim Gavin’s squad after a year abroad.

Dan Martin moves on up in second stage of Volta ao Algarve 19:15
Six Nations 2020: England v Ireland - Ireland player profiles 18:55
Tyson Fury’s best chance is to do what Ali did better than anyone: dance 17:59
Federer knee surgery sparks fears that time is running out 17:38
England coach Eddie Jones apologises after making ‘half-Asian’ comment 16:39
Crossword Get access to over 6,000 interactive crosswords