Rebelettes started strongly but Dublin’s power, speed and skill proved too much 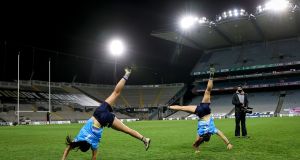 The fitting, final act of a weird old year was delivered with a degree of panache. Where once upon a time Cork had a hoodoo on Dublin, the role reversal was never more apparent than in a second-half display of power, speed and skill that saw one blue wave after another on the December turf which ultimately finished with captain Sinead Aherne, substituted at half-time due to injury, back on the field to lead her team to a fourth successive All-Ireland Senior Ladies football title.

For a 16th straight year, one of Dublin or Cork lifted the Brendan Martin Cup. In this latest instalment, though, Dublin’s journey from a team which lost three successive finals to the Rebelettes from 2014 to 2016 to one capable of dictating their own destiny was showcased with a number of players performing leadership roles. Take your pick. Sinead Goldrick. Carla Rowe. Martha Byrne. Jennifer Dunne. Lyndsey Davey. And others too.

And Dublin needed all of those leadership qualities, from old faces and new, to get the job done. For, after a first-half where Cork were far more efficient in converting their scoring opportunities to take a 1-3 to 0-3 half-time lead into the break, a hint of an upset hung in the crisp air where players made their own noise in the absence of any spectators.

Cork, seeking a first title since 2016, got off to a flying start: with just two minutes gone, captain Doireann O’Sullivan played a beautifully weighted pass to Áine O’Sullivan and the corner-forward’s powerful right-footed shot into the top left corner had Dublin goalkeeper Ciara Trant diving in vain.

The difference in that first-half was Cork’s clinical finishing. By the 18th minute when Noelle Healy flashed her effort for goal wide of the post, that act was Dublin’s fifth wide and the only score had come from Nicole Owens. In contrast, of far fewer chances, O’Sullivan had added a point to her goal and Orla Finn had also pointed to keep Cork ahead. Dublin kept in touch with an Aherne free after a foul on Owens and a point from Healy. A late Finn free gave Cork a three point advantage but it proved to be a different game on the restart.

Where Cork had produced most of the intensity in the tackle and efficiency of scoring in that opening period, the third quarter was where the match was won and lost. Dublin had taken their time to return to the pitch, with Kate Sullivan replacing Aherne. In the captain’s absence, others stood up to the plate, although it was the more unlikely figure of Aoife Kane rampaging forward from corner-back for a point who demonstrated the change in mindset and more aggressive approach.

From the kickout, Goldrick pounced to intercept the kick. It led to nothing, in terms of a score, but again showed Dublin’s increased tempo. And almost straight away Dublin gained possession and quickly and powerfully worked it through numerous hands: Rowe, Owens, Davey and Dunne before it returned to Rowe who had continued her run and was brought to the ground by Cork goalkeeper Martina O’Brien.

As cool as you like, Rowe picked herself up, put the ball on the penalty spot and duly sent O’Brien the wrong way. It was a game changer, as Dublin - shifting up through the gears - moved into the lead for the first time, 1-4 to 1-3, and clinically pushed on. When ball retention was required, that it was what they did; but the slick interchanging movements eventually led to the opportunity of someone breaking through the tackle and it was Rowe who assumed the free-taking role to punish Cork’s indiscretions while Sullivan too got on the scoreboard.

In contrast, Cork’s opportunities were restricted, faced by a blue wall, while their cause of staying in touch wasn’t aided by some poor free-taking with three different players - Finn, Saoirse Noonan and Doireann O’Sullivan - all missing frees. A 52nd minute point from the industrious Owens saw Dublin move into a 1-8 to 1-5 lead and, then, with four minutes and 32 seconds left, Doireann O’Sullivan was sin-binned when shortly after a high tackle on Goldrick, she was too aggressive in one on Lauren Magee.

From there on, there was an inevitability to it all. Healy claimed her second point of the game after a lovely build-up and Rowe put the finishing touches on a fine performance with a pointed free. Magee’s sin binning seven seconds from the end was immaterial by then.