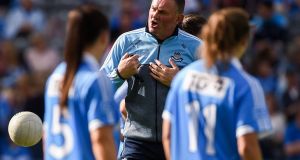 All-Ireland-winning manager Mick Bohan says he sees rule changes down the line as the women’s game gets more physical.

And according to the Dublin boss, the women’s game needed a free-flowing spectacle in the All-Ireland final after the stop-start All-Ireland camogie decider the previous week.

A record 50,141 were there to see Dublin finally defeat Cork in the All-Ireland showpiece at the fourth attempt, a tally that could well be the highest-attended female sporting event in the world this year.

Bohan praised the influence of match referee Garryowen McMahon. “You look at it yesterday, he had to let more go because both teams went at it. We also feel because of the camogie last Sunday, because the game was riddled with frees, there was a little bit of pressure on him to let the game go. My feeling is it was a better spectacle as a result,” said Bohan.

“Realistically if the rules of the game were adhered to ... that’s not the way it was refereed yesterday. And I’m not saying anything against him, if I was in that situation yesterday I think I would probably have done the same as he did. He had to let it go because of the ferocity of the battle.

“Our feeling is there should be a bit more physicality involved, it’s a better spectacle. They’re able for it, they’re conditioned for it, they want it.

“At times it’s frustrating particularly in the tackle when it’s just pulled even though it’s a good tackle. But because you are not allowed make contact with the ball when it’s in somebody’s hands, which is the rule, it just doesn’t make sense.”

Speaking during the team’s visit to Temple Street Children’s Hospital yesterday morning, Bohan admitted he was blown away by the occasion and leading his side to back-to-back All-Irelands.

But he also called for a change of rules to avoid possible injuries when they pick the ball directly off the ground.

“You could see the competitive nature of both sides that went after the prize yesterday. We’re obviously very proud of our group today,” said Bohan.

“Going into that cauldron the atmosphere is magnificent when you hear that amount of noise in there, but I think anyone who came yesterday got their value because there was fantastic entertainment.

“I remember years ago I was involved with the lads and people said to me the pick up should be taken out of the men’s game. I would say to you the only dangerous thing in the women’s game is the pick-up because they are able to run through the ball without stopping and pick it up.

“We have seen over my last 18 or 19 months involved a number of head collisions because of that. No other part of the game is dangerous.”

1 Saracens to accept second 35-point deduction and effective relegation
2 St Michael’s conveyor belt showing no signs of slowing down
3 Welcome to Iten in Kenya – home of champions and cheats
4 Munster mood will be determined before kick-off
5 Leo Cullen: Benetton will play hard to beat in Treviso
Real news has value SUBSCRIBE