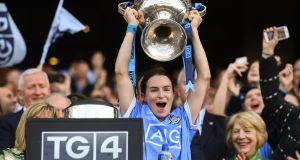 ‘Alive, alive-o” echoed around the ground. The rest of the country may not like the pesky Dubliners winning again, but that’s sport. Dublin annexed the football championships for men and women. Again. On Sunday the blue wave swept over a Cork team that resonated with historical brilliance, who hung in and hung in and hung in, and were 10 minutes short of offering up a nail-biting end.

“I never thought we’d be getting back to back [wins], never mind last year,” said Dublin’s MVP, or Woman of the Match, Carla Rowe, after her side beat Cork in a point-for-point match until Rowe nailed it with her second goal of the day 10 minutes from the end.

For most of the final the teams kept us wondering. But if the managers’ pre-match thoughts were straws in the wind, the outcome, although devastating for Cork, was not entirely a surprise.

“This group are really determined to put a few ghosts to bed,” said Dublin bainisteoir Mick Bohan, alluding to the sweeping Cork hegemony over the years.

“Their [Dublin] age profile would be mid to late 20s, ours maybe early to mid 20s,” offered Cork manager Ephie Fitzgerald, suggesting the Dublin experience was the challenge they had to overcome. Eight of his players had never appeared in an All-Ireland final before.

But Croke Park has its own personality, and the bright lights of HQ can do strange things to teams.

Dublin, aware of their favourites status, and Cork, the most storied team of the last decade, were not blinded by the occasion.

“It was a testament to the standards you raised and we had to surpass,” said a gracious Dublin captain Sinead Aherne to the despondent Cork team.

The hanging question was whether this Dublin team would carry on the way Cork had done for so long, winning 11 of the finals stretching back to 2005. Was this a more permanent regime change?

“Tomorrow they will take great stock that they have actually beaten the best team over the last decade in the country,” added Bohan. Long live the king.

There was little joy around the capital for the colour red. Much better news for the Rebels came from abroad.

Don’t know about the rest of you, but Irish athletes winning world events in amateur minority sports takes its mid-morning emotional toll. It was hanky time on Saturday and Sunday morning on RTÉ. The World Rowing Championship; the Skibbereen jewels, O’Donovan brothers Gary and Paul; the 36-year-old mother of two Sanita Puspure, a gift to Ireland from Latvia.

It wasn’t Cork’s day on the grass of Croke Park, but the county provided a day on the far-away water of Plovdiv that will take some time to be matched.

The camera angles queering the perspective of who is leading. Strings of bikes tearing down the towpath in the background screaming instructions to their boats. Imperceptible changes of stroke rate and tempo from the athletes, enough to burn them out or beat the field.

You get up and you watch rowing for the first time since the 2016 Rio Olympics, and maybe the last time before the 2020 Tokyo Olympics, and you are rewarded with pure gold. Literally.

The mischievous O’Donovans suggesting they were partying hard until the wee hours, point blank refusing to emote on demand for television. BS, their lack of it. It’s a beautiful thing.

“We were out on the town with [the Norwegians] last night, and we said to them, ‘we have a big day tomorrow. We have to be on form’. We headed away early, around 2am!”

Puspure crossed the line with virtually no other boat in the frame.

A tough day in Dublin, but Cork did fine by its athletes.

1 Conor McGregor stops Donald Cerrone in 40 seconds on UFC return
2 Munster cruise past Ospreys on a dead rubber day at Thomond
3 ESPN, UFC ignoring McGregor’s shady actions to capitalise on pay-per-view king
4 14-man Saracens on the brink of last-eight after edging Racing 92
5 GAA hopeful club finals crowd will not be hit by date change
Real news has value SUBSCRIBE
Here is your handy guide to sport on television this week

Here is your handy guide to sport on television this week 17:01
Burnley end win drought to add to Leicester’s woes 16:21
Munster cruise past Ospreys on a dead rubber day at Thomond 15:47
Real Steel sees off stablemate Footpad at Thurles 15:36
14-man Saracens on the brink of last-eight after edging Racing 92 15:50