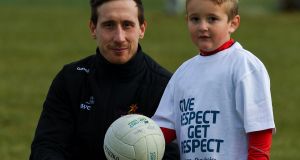 All Star Colm Cavanagh of Tyrone with five-year-old Dylan O’Kane during a coaching session at Philadelphia GAA Club during the PwC All Stars Football tour. Photograph: Ray McManus/Sportsfile

In a way, a hotel in Philadelphia on this year’s PwC All Stars football trip is as good a spot as any for Colm Cavanagh to reflect on his year.

His selection at full back caused some controversy when announced in October, as he has played with a centrefielder’s jersey and was named there in last year’s All Stars.

Yet since 2015, he has been Tyrone’s defensive linchpin, playing at sweeper and orchestrating from the back and his success doing that has enabled him decisively to step out of his brother Seán’s shadow.

“I was surprised,” he says about the All Star, “but obviously a nice surprise – delighted to be recognised again this year. I played a long time, nine years without any sort of personal recognition, albeit, yeah, full-back. I probably didn’t see myself playing there as much.

“Actually, if anything, I probably played more out the field this year than I had done in the prior year but, by the same token, just delighted to be selected.”

“Colm Cavanagh’s ability, I mean in that position [sweeper] – I don’t think there’s any player at present that is anywhere near him because for me, there is his ability to drop back and spot danger and then get forward.

“His ability just to read the game, in whatever situation that they are in, for example if he sees a man coming into the zone that he’s covering, he’s able to read it to push up and stop the easy score and easy pass.”

It is an irony that, as he himself pointed out, Cavanagh probably got forward more often this year and that he considers himself a centrefielder.

But his best moments were at the back, such as the tackle on Jack McCarron at the end of August’s All-Ireland semi-final against Monaghan and his orchestration of the defence in the critical quarter-final round against Donegal – a display described by manager Mickey Harte as the player’s best match for Tyrone.

Injury limited his involvement but he played in 11 of the county’s 16 league and championship matches. Excepting the league fixture against Mayo when he picked up an early black card, he played 692 minutes out of 720 and Tyrone conceded just seven goals on his watch.

In the All-Ireland final against Dublin, and in last year’s semi-final against the same opponents, Cavanagh was thrown in at full forward for the closing phases. With the new rules being trialled in the league – he thinks there are too many, which will put pressure on referees – including an attacking mark, might he be needed there full-time?

“It sort of brings it closer to the AFL-type rules, which I don’t know if you really want to go down that road but if that rule did come in, you could see a shift in personnel and who’s going to be up front. You’d look at our inside line of Mark Bradley, Conor McAliskey and those lads [who] aren’t big fellas like. You may want to put bigger men in and encourage kicking the ball.”