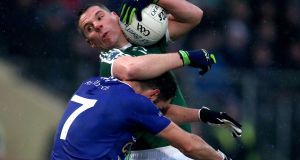 They’ll remember this as the day they won it twice. The curtain fell on the Ulster football season with an electrifying game on a soaking wet day in Omagh and the completion of Gaoth Dobhair’s march from a long period in obscurity.

The Donegal champions won their first Ulster title deep into the second period of extra-time, when Shane Ferry moved onto a quick and smartly taken free by Eamonn McGee to edge them into the lead with the light fading and players exhausted across the field.

For Gaoth Dobhair supporters in the crowd of 5,313, the last whistle made up for those controversial few seconds on the cusp of ordinary time when Michael Carroll struck what looked to be a beautiful, championship-winning point but referee Noel Mooney had whistled Odhrán McFadden- Ferry for a throw ball as he set Carroll up.

It was a huge moment in a riveting match played in treacherous conditions: Kevin Cassidy the voice of reason as the Gaoth Dobhair men protested while Scotstown were just glad to still be in the competition. But it was also the correct call and a hugely courageous decision by the official.

“It was frustrating,” said Eamonn McGee later. “It was a bit edgy in the dressing room, effing each other out of it, which never happened through the year. And I was just thinking: this is a dangerous spot. So we just calmed down and regrouped.”

Sheets of December rain made every possession a gamble and battle for the players of both sides in a match that was understandably untidy but packed with passages of terrific play.

Both sides had their homework done. Damien McArdle picked up Odhrán Mac Niallais and stood close to the Gaoth Dobhair playmaker from the first minute, pushing him away from that lethal left foot and limiting his opportunities to become involved in open play.

Rory Beggan spent long periods of the game on the Scotstown 50 metre line, ushering his team-mates forward with the jaunty stroll of a farmer driving cattle on a rainy Sunday. The teams coveted possession and attacked in brief, piercing bursts.

The scores were infrequent but of very high quality, with Shane Carey finding the space three invaluable scores from play while Darren and Kieran Hughes drove Scotstown forward all afternoon.

The wide open channels which the Donegal champions created against Crossmaglen were nowhere to be found here but they concocted half a goal chance when Cassidy, brimming with menace at full forward, got a touch on Eamonn Collum’s attempted point, leading to a frantic goalmouth scramble.

Daire Ó ’Baoill was there to follow up but slipped in the muddy goalmouth as he tried to connect first time. Seconds later, Darren Hughes had pointed at the other end.

The duel between Donal Morgan and Cassidy was one of the highlights of the day: Morgan made a brilliant block on the Donegal veteran in the last minute of normal time but Cassidy’s handling and ball movement was superb as this final deepened into a game of roulette in which every dispossession and mistake seemed ruinous.

“It took a bit of balls: they didn’t play a sweeper even though Cass’ had been talked about all through the championship,” noted McGee.

“We just piggy backed on them,” McGee said of the U-21 brigade’s influence this year.

But after Scotstown had opened up a 0-8 to 0-5 points lead 10 minutes after half-time, Mac Niallais gradually began to shake off McArdle’s attentions, becoming involved in the play and striking the point – one of those languid left footed shots of his on the run – which finally restored them to parity at 0-11 with two minutes remaining.

That score felt like a momentum shifter, even as those two minutes became a madcap series of brilliant covering tackles, spilled passes, a late, long free from Beggan which fell short and finally that throw-ball call which brought the match into added time.

The dismissal of Shane Carey for a high tackle on James Ó Baoill – clumsy rather than malicious – gave the Donegal men a critical edge. Notably, the points that gave them their first lead since the 21st minute came from two of their young substitutes, Ó Baoill and Ferry.

It was a gruelling place for Scotstown to find themselves: 70 minutes on a terribly heavy pitch, Carey no longer a scoring option and Gweedore organised and closing down, mindful of not coughing up any more free opportunities for that raking boot of Beggan. They fell just short.

Gaoth Dobhair are set for a fascinating game with All-Ireland club champions Corofin as their long, splendid season goes on.