A week after their Under-17 All-Ireland win, Rebels inflict another defeat on Dublin 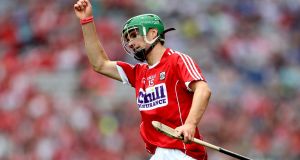 Cork’s Under-17 team did the damage last weekend, beating Dublin in the final of that inaugural competition, and five of that team returned to line out for the minors.

Midfielder Daire Connery was among that group and turned in a terrific performance, scoring five points and helping Cork to dominate the middle third.

Dublin scored goals in stoppage time of both halves, through Eoghan O’Neill and Mark Grogan, but the Munster champions led for the majority of the game and were worthy winners.

Cork’s reward is an All-Ireland final clash with Galway on September 3rd, their first final appearance in a decade, and it may be a good omen that their last win at this grade came in 2001 at Galway’s expense.

Ring admitted that winning both the U-17 and minor titles within weeks of each other would be a memorable achievement that would stand the county in good stead.

“Absolutely, and that is the intention,” said Ring. “It’s a very good time to be involved in Cork hurling. The 17s are working hard, we as a minor team are working very hard as are the U-21s and seniors.”

Cork lost full-forward Robert Downey to a 45th minute red card after picking up his second booking following what was considered a wild pull.

“The ball was dropping and Rob went to double on it and I don’t think there was any intent,” said Ring of the incident.

Dublin led briefly early on but were on the back foot when they conceded six points on the trot between the seventh and 15th minutes.

It was only O’Neill’s kicked stoppage time goal that gave them hope as they trailed 0-11 to 1-4 at the interval.

Dublin goalkeeper Conor O’Donoghue had the chance to leave just two in it early in the second-half but blazed a penalty wide of the right upright.

Turnbull was terrific for Cork throughout the second-half and picked off eight of his points in this period, many frees and a number of those which he won himself.

Cork didn’t hit a second-half wide while Leinster finalists Dublin hit a dozen overall in the game and were punished by Turnbull for consistently conceding frees.

“If we’d converted what we created today, I actually think we would have been ahead by a good distance so we won’t be looking for excuses elsewhere,” said Dublin manager Fintan Clandillon.