England beaten by Belgium; Cork a really good team from 8-15 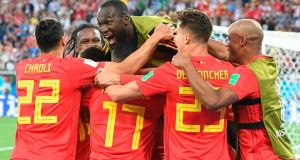 Belgium won the battle of the ‘B’ teams against England last night, and their reward? A World Cup last-16 clash with Japan. England meanwhile - beaten by Adnan Januzaj’s beautiful strike - will face Colombia. However, if they were to get by James Rodriguez and co, they would avoid Brazil in the quarter-final and instead face Sweden or Switzerland. But that’s a big IF, Keith Duggan was at the match in the Kaliningrad Stadium, where England lost the game: it remains to be seen if the magic left too. Colombia meanwhile progressed as the top team in Group H with a 1-0 win over Senegal, who lost out on second spot because of Japan’s better disciplinary record. The round of 16 commences tomorrow, here’s your guide to those eight fixtures.

One of the highlights of the competition so far for Irish viewers has been RTÉ co-commentator Brian Kerr. From banjoed to wojous, Mary Hannigan has put together ‘The Brian Kerr World Cup phrase book’, and it’s brilliant: “The knicky-knacky redser was right to have a ging from there, but it was a wojous effort, hit the ’keeper straight in the mush and now he’s gone down banjoed.”

1 Coronavirus: 133 patients in intensive care as pressure on hospitals builds
2 A letter to Ireland from Italy: this is what we know about your future
3 Look on the bright side: International Space Station visible in Irish skies tonight
4 Tempers fray as coronavirus lockdown fatigue hits Italy and Spain
5 Coronavirus: Letters flow to self-isolating father whose children were found dead
6 Coronavirus: Spain suffers record number of deaths as UK figures surge
7 Banks warn of increase in online scams targeting Covid-19 concerns
8 US authorities scrutinise Zoom’s practices as app sees traffic surge
9 Coronavirus: Restrictions resulting in ‘huge’ fall in rate of infection growth
10 Looking for a nifty home-working desk? This Irish designer model could solve your problems
11 I was on the Peru rescue flight. This is what happened
12 Ireland ‘squanders’ geographical advantage with different Covid-19 stances North and South - Scally
13 How to make a rhubarb and custard tart worthy of Ballymaloe
14 Medtronic shares ventilator design publicly to increase production
15 Seanad election: Green Party’s Saoirse McHugh fails to win seat
16 Man arrested after social distancing row at bank is released on bail
17 From yoga to HIIT training, your guide to solitary exercise
18 How to budget your way through financial realities of Covid-19
19 Meath couple’s company hit with €105m discount on purchase price
20 Fintan O’Toole: We can’t help giving meaning to this absurd virus
21 Paul Flynn: Here’s what happened when my kids took over our kitchen
22 Testing failings mean we do not know exactly where the virus is circulating
23 The chickpea stew that broke the internet in the US is here. Give it a go
24 Gabriel Scally: North and Republic must harmonise Covid-19 response
25 Irish economy to suffer mildest shock to output from Covid-19, OECD says
26 Irish Life indicates customers can expect discounts in coming months
27 Coronavirus: Northern Ireland death toll rises to 28
28 Couple in mortgage legal-fees dispute get €10,000 compensation
29 Covid-19: Teachers may be redeployed outside education sector
30 10 hilarious Irish comedy videos to watch on YouTube
31 Restaurateurs seeking deals on rent with many payments due this week
32 Judge dismisses claim man was maliciously prosecuted over Shell to Sea protest
33 Sky Sports customers set to save on bills until Premier League returns
34 Tesco Ireland unable to increase contactless payment limit currently
35 Gerry Thornley: Changes to tackle laws could transform rugby by time of next World Cup
36 Warning of coronavirus risks over careless handling of shopping
37 Cycling group secures court decision over permission for Dublin apartments
38 Which is the the best video calling option for you?
39 Insurer FBD names Paul D’Alton as interim chief executive
40 Covid-19 to see Dublin hotel development decline by 32%
Real news has value SUBSCRIBE