Dustin Johnson finishes up on top; Owen Farrell to discover his fate tonight 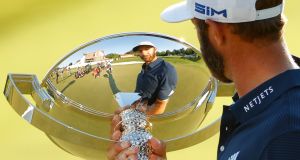 Dustin Johnson with the FedEx Cup trophy after winning in the final round of the Tour Championship at East Lake in Atlanta. Photograph: Getty Images

Dustin Johnson held off determined challenges from Justin Thomas and Xander Schauffele to win the Tour Championship, FedEx Cup title and the first prize of $15 million in Atlanta overnight. Johnson saw his five-shot overnight lead cut to two, first by playing partner Schauffele and then Thomas, but the world number one held his nerve to secure the eight-figure payday at East Lake. Rory McIlroy, who celebrated becoming a father for the first time with the birth of daughter Poppy a week ago, carded five birdies and two bogeys in a closing 67. That left him 11 under par overall and in a tie for eighth place.

In his column this morning Gerry Thornley writes that it’s hard to fathom Munster’s approach to playing Leinster in last weekend’s semi-final: “Watching their comparative lack of ambition and width against Leinster – despite Johann van Graan, Stephen Larkham and Graham Rowntree having a full pre-season as such with the entire squad – was hard to fathom.” Ahead of this weekend’s Pro14 final James Ryan looks set to return from the shoulder injury that has ruled him out post-lockdown, while Ulster head coach Dan McFarland believes his underdogs are in with ‘a puncher’s chance’ of denying Leinster three-in-a-row. On Saturday week Leinster are in Champions Cup action against Saracens, who are set to be without their talisman Owen Farrell. The England captain faces an online disciplinary hearing tonight when he will discover the length of his suspension for being shown a red card for a dangerous tackle against Wasps. His head coach Mark McCall is planning for the heavyweight quarter-final clash without his outhalf.

1 Graham Norton: ‘I wanted out, out, out of Ireland’
2 Speed and distance of Covid-19 droplets tracked by Mater researchers
3 Covid-19: Seventy cases in Cork traced to local pubs and restaurants in recent weeks
4 Eighteen revelations from a trove of Trump tax records
5 Olivia O’Leary: If you move to Carlow, there are things you’ll have to get used to
6 ‘I never suspected that, aged 29, I’d be lost’
7 AfD fires spokesman who favours ‘shooting or gassing’ migrants
8 More than 30 people queue overnight to secure property in Carlow
9 Susie Dent: ‘Jimmy Carr is incredibly rude to me. I took it as a compliment’
10 Hello Eir, is anybody there? Four unhappy customers complain
11 Three Ireland switches on 5G network around the country
12 Nurse who falsified prescriptions is struck off register by High Court
13 Harry Crosbie puts family haulage business into liquidation after port dispute
14 Covid-19: Possible extra restrictions for four counties to be decided by weekend
15 Bus Éireann to shut many inter-city routes due to financial pressures
16 Donald Trump's taxes: US president paid $750 federal income tax the year he won the election
17 My cancer scare, the marathon and me
18 Ken Early: Handball ‘crisis’ a timely distraction from the grim bigger picture
19 Liverpool maintain perfect start with win over Arsenal
20 Gardaí seeking to track movements of man (48) prior to unexplained death
21 The Irish Times view on Donald Trump’s taxes: an overdue lifting of the veil
22 Thirteen men have begun training for or are considering priesthood
23 The Secret Teacher: My students’ capacity to socially distance is worryingly low
24 Positive omens for Kenny ahead of Ireland’s Slovakia clash
25 Large sections of Garda to be disarmed following review
26 Gardaí want to talk to three males over alleged rape in Mayo
27 Donald Trump’s Irish and Scottish golf courses ‘reported losses of $63.6m’
28 UCD professor asked to resign from EU committee over Covid-19 claims
29 Trump and Biden prepare to face off in first presidential debate
30 Dublin Halloween festival cancelled due to Covid-19
31 Prince: Sign O’ The Times reissue reveals a brilliant trove of unheard songs
32 Great outdoors: Meet the teachers taking lessons beyond the classroom
33 Over 10,000 more people on pandemic unemployment payment in past week
34 There’s something grotesque about council’s plan to destroy historic horse yard for hotel
35 The Offload: Springbok heavyweights heading for Pro14
36 High Court approves ECT treatment for elderly priest
37 Are you a non-lying cheat or just radically dishonest?
38 City council to investigate Central Bank’s bird scaring device
39 No joy for consumer with a faulty Husqvana chainsaw
40 Northern Ireland reports 220 new cases of Covid-19
Real news has value SUBSCRIBE