Acclaimed for his books on the sport, but Harold Seymour never gave his wife credit 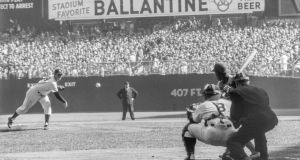 Don Larson of the New York Yankees pitches to Jim Gilliam of the Brooklyn Dodgers as catcher Yogi Berra and umpire Babe Pinelli look on during the 1956 World Series at Yankee Stadium in New York. Photograph: Stanley Weston/Getty Images

When the American professor and his wife arrived in Mayo in 1973, The Western People was immediately on the case. Word had reached it that the newcomer, Harold Seymour, was a bit of a big deal back home, a writer whose groundbreaking books on the history of baseball had turned the national pastime into a legitimate academic subject.

Arriving in Ireland to finish the third volume of his magnum opus on the sport, hoping the “peace and tranquillity” would increase productivity, he had transported his entire library from Massachusetts to an idyllic cottage, where the New York Times Sunday edition arrived in the post each week.

Describing him as “the baseball don” and its “foremost living authority”, the Western People feature lauded Seymour as a genuine literary celebrity who had produced gargantuan feats of research that helped a country figure out the origins and the formative decades of its most cherished game.

That was the prevailing narrative about him, but turns out it was only half the story. While it was, indeed, his name on the cover of each seminal tome, a lot of the heavy lifting was being done by Dorothy, the woman he married in 1950. And the only time he ever gave her public credit was to mention her in the acknowledgments and to praise her typing skills in interviews.

“Everyone assumed that he had done all that work by himself – that’s what he wanted them to assume, but we were equal partners,” said Dorothy Seymour Mills, whose death at the age of 91 last month brought her (for too long) unsung writing career back into the national spotlight.

“All these things were done jointly. He just couldn’t share credit. And I didn’t say anything at the time, because at the time, wives just didn’t do that.”

The couple met when he was teaching at Fenn College in Cleveland and she, 18 years his junior, was still an undergraduate English student. They were married before she graduated and, soon after, he embarked on what would be his life’s work, bringing a professional historian’s scrutiny to bear on baseball for the first time, revolutionising the understanding of where the game came from and how it grew.

The type of archaeological sifting through the early decades of the professional leagues unearthed the nugget that the Irish were once so dominant on the diamond, it was reckoned they must have a genetic predisposition towards ball-playing.

If I had not taken hold of the writing when I did, the manuscript would not now be done

As critics and aficionados alike fawned over the breadth and scope of his scholarship in Baseball: The Early Years (1960) and its sequel The Golden Age (1971), especially relishing the fact a former Brooklyn Dodgers bat boy was writing the definitive history of the sport, Dorothy Seymour was actually the one trekking to libraries, wading through microfiches of local newspapers, and piecing together whole narrative sections. When his health started to fade due to Alzheimer’s, she alone wrote one third of the chapters for Baseball: The People’s Game, published in 1990, two years before his death.

By then, she had also broached the issue with him of receiving proper and full credit for her contribution, going as far as producing a 12-point paper, arguing her case just for her name to appear in smaller type below his in the final book.

“If I had not taken hold of the writing when I did, the manuscript would not now be done,” she wrote. “You’re concerned with the way your name will appear in the book. I, too, am concerned with the way my name will appear, and in my view of all the work I put into the book – devotion is not too strong a word – I do not think it fair for my name to appear in the acknowledgments among people who might have sent in an article or co-operated as a librarian . . .”

With the outsize ego of a man who insisted on always being called doctor long after he gave up teaching, Seymour wouldn’t budge on the issue of recognition for his partner in the enterprise. Having written children’s books of her own in the 1960s, she embarked on a prolific career as a novelist after her husband’s death, and produced a memoir, A Woman’s Work: Writing Baseball History with Harold Seymour. Finally, in 2010, a New York Times story about her life and underappreciated work highlighted the injustice done and prompted a campaign to right the wrong.

Oxford University Press, publishers of the trilogy still regarded as base camp by all serious historians of the sport, soon announced all future printings of the books would credit her as co-author. And the Society for American Baseball Research annually awards the Dr Harold and Dorothy Seymour Medal to the best book of baseball history or biography.

The couple only lasted a couple of years in Mayo. In an age of more primitive communications, being 3,000 miles from the archives they needed to constantly check sources began to wear on their patience. Not to mention the New York Times always arriving “a month late and in a rather soggy condition”, which got old fast.

“In the 1970s, when I lived in Ireland,” wrote Dorothy Seymour, “especially when I took walks in the quiet gorse-bordered lanes at twilight, I often got the feeling of being watched by the ghosts of ancient people who lived there long ago.”

1 Ireland v Scotland: Doris’ day as Caelan set for first cap
2 Gary Lineker: ‘60 is just a number, 70 is the one to worry about’
3 Six Nations: Pundits, journalists and players have their say
4 Kobe Bryant obituary: A transcendent, if enigmatic, superstar
5 Castleknock stand firm to repel Roscrea’s comeback
Real news has value SUBSCRIBE
Here is your handy guide to sport on television this week