Ryan and McSharry at the vanguard of Irish swimming revolution 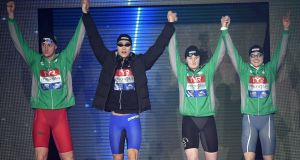 Swimming may claim it happened many years back. But sometimes milestones have to be reached to pause a moment and then move on. It was 21 years ago when Swim Ireland rose from the ashes of the discredited IASA and began a process that retrieved swimming from the crime pages.

Soon after Michelle Smith de Bruin divided sport and country in the 1996 Olympic Games, breathlessly winning three gold medals. It was another spasm, another controversy.

But last week at the European Championships in Glasgow, and after years of self reflection and spikes in form from individuals, Irish swimming began to find its own place and redraw an image of collective success at international level.

There were two bronze medals won in Scotland but other metrics over the short course event sought to push Ireland further than ever from its past.

Over the week a group of 19 swimmers, the biggest Irish team ever sent to compete in a European Championships, set 20 National Records. 15 of those were Senior Records and four Junior Records. The team competed in ten semi-finals and nine finals with Shane Ryan and Mona McSharry making the podium.

Danielle Hill, out of the medals, ended her week in the 50m Freestyle semi-final with a fifth record of the week. The Larne swimmer also broke 25 seconds for the first time then lowered it again to 24.44 for ninth place.

“The metrics suggested are absolutely valid to success,” says Swim Ireland coach Ben Higson. “I’d also say that from a subjective measure the amount of personal best times set by every single individual on the team was significant. It again suggests to myself and the performance team that athletes are beginning to believe they belong at that level and are able to produce the goods on the day that counts.”

Raised in Havertown, Pennsylvania and currently living in Ireland, Ryan’s father, Thomas, emigrated from Portarlington in the 1980s. His mother, Mary Beth Bonner is from Mayo. A World Championship bronze medal winner last year in China and World University Games gold medallist in 2017, the 25-year-old hit another first.

“I really wanted a medal to bring back to Ireland because I’ve had three other international medals but that was when I was living in the states,” says Ryan.

“But now I’m living back in Ireland and I ended up bringing a medal back to Ireland while living in Ireland. So that was a really big one.”

It is also a different language the Irish swimmers are speaking. Ryan swam 11 races in Glasgow. It was a high output. He didn’t fade and was able to go prelims, semi-finals, finals.

“Now I want a semi-final and a final and I want to try and come back with a medal. My prep right now I know what I need to do and I have just got to chip away.”

There is no direct correlation between successful 25-metre swims transferring to the Olympic sized 50-metre pool. Records in one do not translate into records in the other. McSharry knows it.

A junior European Champion in the 50m and 100m breaststroke and a junior World Champion over 100m, Glasgow was her first senior medal at a world event. There is a marked upward sweep to the 19-year-old’s career.

“You can’t convert it directly. But if you are feeling good in the water now, mentally that just does wonders when you are going into long course more so than anything,” said McSharry. “I’m full time swimming. I did the Leaving Cert last year and I’m taking a year out now. Then I’ll be going to Tennessee in America next year to train and go to college.

“There is a time we have to hit. But I honestly don’t know yet where I am in terms of the time because I haven’t raced long course this season. Going off my short course times I’m really excited to see where I am. I’m going to try and qualify for the Olympics and after that start looking where I’ll be and where I want to get to.”

Darragh Greene became the first Irish swimmer to go inside the Tokyo 2020 Olympic Qualification time. The Longford athlete set a new Irish record in the heats of the 100m Breaststroke in South Korea at this year’s World Championships and represents Ireland in the 100m and 200m breaststroke events. Ryan also has his ticket for the Tokyo 100m backstroke in Tokyo.

A team of four competed in Rio 2016, all of them first-time Olympians, with Fiona Doyle, Ryan and Nicholas Quinn in the pool and Oliver Dingley in diving. At London 2012, there were also four athletes, Barry Murphy and three women, Sycerika McMahon, Grainne Murphy and Melannie Nocher.

“It's superb timing,” says Higson. “What a European short course does in December, it allows for a mid season check point for the coaches and athletes to see where they are in the year of the Olympic cycle. When an athlete is breaking records and making strides forward absolutely it a gives them confidence.”

Seven months is quite a distance to Tokyo. From where swimming has come from it might not seem that far away.