America at Large: one of baseball’s biggest cheaters on top of his game in TV 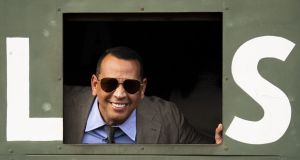 Alex Rodriguez before a game between the Boston Red Sox and the New York Yankees on September 8th, 2019, at Fenway Park in Boston, Massachusetts. Photograph: Billie Weiss/Boston Red Sox/Getty Images

The most notorious steroid-user in baseball history is never off American television these days. No sooner had Alex Rodriguez finished the season as lead analyst on Fox Sports’ coverage of the World Series than he began fronting CBNC’s Back in the Game, a show in which, rather ludicrously, he serves as life coach for down-on-their-luck retired athletes and entertainers.

In between those two high-profile gigs, the former New York Yankee third baseman can be seen in just about every commercial break, smiling effervescently in a cheesy ad for Mastercard.

The last gig might be the most discomfiting of all. A credit card company whose entire business model is predicated on combatting fraud and promising financial probity is paying presumably large sums to have a self-confessed serial cheater pitch its services.

In a country where the stigma attached to getting caught using performance-enhancing substances is now so diminished as to be almost non-existent, it’s still startling to see the walking pharmacy formerly known as A-Rod getting paid to lend his celebrity and lack of integrity to anything.

Even if baseball is a sport whose attitude to steroids has always been and remains astonishingly laissez-faire, Rodriguez wasn’t just any old fraud.

Having admitted in 2009 that he had used various illegal substances earlier in his career with the Texas Rangers, he was later implicated in the Biogenesis scandal, where Anthony Bosch, a fake doctor at a Florida anti-aging clinic, was supplying several Major League players with testosterone and HGH.

For 21 months Rodriguez vehemently protested his innocence in the most Trumpian fashion, declaring the investigation a witch hunt and going to legal war with Major League Baseball and the Yankees.

During that imbroglio he hired a private investigator to trail club officials in an effort to dig up dirt on them, and stormed out of an arbitration meeting with the league in New York to head straight across town to a radio studio where he repudiated all charges and railed against the authorities.

The tone and delivery of his repeated denials that day were almost sociopathic in their faux sincerity, especially given that here was a man who once allowed Bosch to draw blood from him in the men’s room of the LIV nightclub in Miami Beach.

After later being forced to admit to getting HGH, testosterone cream and testosterone lozenges from the quack physician, and incurring a one-year suspension from baseball in 2014, he still threatened to sue the Yankees for withholding a $6 million bonus due when he hit the 660th home run of his career the following season.

Eventually retiring with total earnings of close on $500 million, and the honour of being dubbed “A-Hole” and “A-Rat” by the New York Post, Rodriguez moved seamlessly from the diamond to doing cameos on Shark Tank and working with the Yankees as an adviser to young players.

“Our job as an organisation is to utilise every resource possible to allow them to reach their potential, and I expect Alex to directly contribute to their growth and success,” said Hal Steinbrenner, a managing partner of the club whose reputation the same player had traduced for years. “Baseball runs through his blood.”

Along with a stream of chemicals.

Barry Bonds and Mark McGwire, his competition for title of the game’s worst cheat, were welcomed back into the baseball fold too, but only after undergoing some sort of perceived decontamination during periods of enforced exile. Even still, they have not been admitted to the sport’s Hall of Fame.

In a similar vein, no major corporation has sought out Lance Armstrong although that may be because America’s interest in cycling ended abruptly, about the same time his lies were exposed.

“I cannot speak about anybody else,” said Rodriguez in the New York Times earlier this year. “If you’re asking about me, I think it started with taking full responsibility for my missteps. I paid a huge price: the longest suspension in the history of MLB for PED use. And while I was away I took that year to reflect. I wanted to understand why I kept shooting myself in the foot. I wish it was in the foot actually.”

He had to give up the Yankees’ job after two seasons because he became too busy with his television work (for ESPN and Fox), and his burgeoning career as an investment guru and head of the A-Rod Corp, with financial stakes in everything from esports to gyms. Not to mention getting engaged to the actress and singer Jennifer Lopez in a volatile match made somewhere in tabloid heaven.

The various strands of his turbulent life come together in Back in the Game where he is seen trying to help Evander Holyfield, among others, earn back some of the $200 million fortune he lost to divorce, child support and bad advice.

The selling point is that if Rodriguez can transform himself from villain to hero while coining it, he can surely put the boxer’s life back on track.

The premise appeared plausible enough until earlier this week Dave Weintraub, an entrepreneur who featured on the show, claimed it is completely scripted.

He alleges that Rodriguez feigns business acumen, merely repeating sage advice being fed to him by producers through an earpiece while actually knowing very little about investing or marketing. The accusation seems to be that he’s faking it, cheating the viewer, and pretending to be something he’s not.

1 Rory McIlroy hoping course-and-distance form will stand to him at Harding Park
2 Martial winner makes sure than Lask don’t have the last laugh
3 Shane Lowry knows back-to-back Major hopes down to his putting
4 Seán Moran: Boylan documentary offers a compelling insight into former Meath boss
5 Brooks Koepka: ‘I should probably win’ US PGA Championship
Real news has value SUBSCRIBE
Here is your handy guide to sport on television this week