Footballer by trade, golf pro by vocation: the extraordinary life and times of Ronnie O’Brien 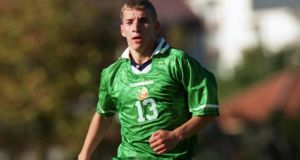 Maridoe is one of the newest and most difficult golf courses in America. A gargantuan Dallas track that stretches nearly 8,000 yards from the back tees, the head professional at this fledgling club has a rather unique boast. He has his own YouTube highlight reel that, instead of demonstrating him performing corrective surgery on a malfunctioning swing, shows him cutting in from the right wing and curling shots into the top corner. Footballer by trade. Golf pro by vocation. His name is Ronnie O’Brien. You may have heard of him.

Just over 20 years ago Carlo Ancelotti introduced O’Brien for the last 13 minutes of Juventus’ Intertoto Cup semi-final against the Russian outfit Rostselmash. Making his third cameo in the competition, he pulled the famous zebra-striped shirt over his head (O’Brien 17 on the back) and slotted in comfortably alongside Edgar Davids, Alessandro Del Piero, Filippo Inzhagi and Ciro Ferrara. Club captain Antonio Conte was his room-mate for part of that pre-season at Chatillon, Davids brought him out for dinner to make him feel welcome. And the unfortunate Liam Brady comparisons were lazy and inevitable.

A few months later, by which time Juve had sent him out on loan to Lugano of Switzerland (Serie A clubs had no reserve teams), a small army of internet geeks (who may or may not have been his friends) decided it would be quite the ruse to insert the unwitting O’Brien into Time’s Man of the Century online poll. In the days before social media, this jolly jape was a precursor to viral sensations, garnering global headlines as the 20-year-old from Bray, Co Wicklow suddenly began amassing more votes than Winston Churchill, Albert Einstein, Gandhi, and a whole host of luminaries.

Eventually, the editors sussed something was awry, scuppered his putative candidacy and earned him one bizarre footnote in cultural history. In terms of column inches generated, 1999 had been quite the year for O’Brien. In February, he was released by Middlesbrough without ever playing a first team game then promptly courted by the Old Lady of Turin. An unusual and dramatic reversal of fortune that caused a brief media frenzy. One minute shown the door by Bryan Robson, the next signing a four-year £3,000 per week contract with Roberto Bettega over a spaghetti dinner.

A video of his wing wizardy and a scouting report of a performance for Boro reserves had apparently persuaded the Italians he possessed a nascent talent that Robson just could not see.

“Ronnie O’Brien is not good enough,” said the then Middlesbrough manager in a rather graceless response to the news. “People jump to the ceiling because he has gone to Juventus but he hasn’t done anything yet.”

That one magical summer training with Zinedine Zidane (after whom he named one of his kids) and the Bianconeri was to be the high point of O’Brien’s sojourn in Italy. While Richard Dunne, Robbie Keane and Gary Doherty, peers of his on Brian Kerr’s team that won the Under-18 European championships in 1998, began to graduate to the senior Irish squad, his career arc was trending downward. There were fleeting and unimpressive stints down the food chain at Crotone and Lecco before a more productive loan spell at Dundee United caught the eye of the Dallas Burn of Major League Soccer.

A long way now from Stadio delle Alpi, he arrived in Texas in the summer of 2002. Initially hoping just to get fit during the European off-season and seriously struggling to cope with the oppressive heat, he, somewhat improbably, found a home. For a few seasons with Dallas, and later the San Jose Earthquakes, he was, despite a career-threatening knee injury, one of the best midfielders in MLS. A regular on the All-Star team, during the build-up to the 2006 World Cup there was even speculation about Bruce Arena trying to figure out a way to make him eligible for the USA squad for that tournament.

If nothing came of that, and he subsequently turned down an invite to join the Irish squad for an American tour under Steve Staunton in 2007, O’Brien did enough in those years to cement his status in the American game and to fulfil some of the undoubted potential that earned the move to Serie A. After his career was ended prematurely in 2009, by a derisory San Jose contract offer and the debilitating effect of his knee problem, he opted for a very different set of clubs.

“When I was playing soccer, I spent a lot of my downtime on the golf course with teammates,” O’Brien said. “I fell in love with the game and making it a career felt like a natural progression once my soccer days were over.”

Having cut his teeth as an assistant at some prestigious courses around Dallas, he was appointed head professional at Maridoe in 2015, a venue currently being spoken of as the future host of a US Open or PGA Championship. O’Brien still competes and last year was named to the Northern Texas PGA team that plays Southern Texas for the Joe Black Cup, an annual Ryder-Cup style team event held over the course of a weekend.

Not quite Man of the Century material but the boy done . . . yeah.