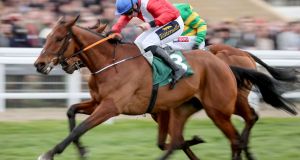 A Christmas target for exciting novice hurdler Envoi Allen will not be decided until nearer the time.

The unbeaten five-year-old, who won the Cheltenham Bumper in March and is already a Grade One winner over hurdles, is currently one of the most talked about horses in racing.

Owned by Cheveley Park Stud and trained by Gordon Elliott, he has quotes as short as 8-1 for the Champion Hurdle, such was the impression he created in winning the Royal Bond, and does have the option of running in the Matheson Hurdle against his elders at Leopardstown.

He is also engaged in the Paddy Power Future Champions Novice Hurdle or could even wait for the Lawlor’s of Naas Hurdle, a Grade One over two and a half miles on January 5th — if connections decide to step up in trip.

“He’s got a couple of options and we’ll all have a discussion and make a call nearer the time,” said Cheveley Park’s Chris Richardson.

“He’s in the two-mile Grade One and the novice, obviously, so we’ll look at the opposition and see how things are.

“He came out of Fairyhouse well, he did have a little nick on a front pastern which required a couple of staples, but I don’t think it’s of any significance. We’ll just see how he is before Christmas.”

There has been plenty of talk over which trip Envoi Allen will eventually be seen at his best, but Richardson sees no reason to move up just yet while his winning streak continues to extend.

“We keep saying he wants stepping up in trip, but until he’s beaten at two miles there’s probably no need to. It looked like Gordon’s other horse (Abacadabras) was going to come with more speed, but his stamina told and he stayed on well,” said Richardson.

“He keeps finding when he’s asked the question. We’ll be looking at his options, but we’re happy at two miles for now.”

He added: “The Thompsons (owners) are loving it, Mr Thompson decided he wanted to have some Cheltenham horses and luckily they are nice horses. To get one like Envoi Allen is a dream come true.”

As well as Envoi Allen, the famous red, white and blue silks were carried to victory at Cheltenham in March by Henry de Bromhead’s A Plus Tard, and he will also be in action at Leopardstown over Christmas.

“A Plus Tard will go for the Grade One over two miles at Leopardstown on December 27th,” said Richardson.

Meanwhile, Articulum is likely to go back over fences for the Dan Moore Memorial Handicap Chase at Fairyhouse next month following a decent effort over hurdles.

Trainer Terence O’Brien feels the €100,000 prize over two miles and a furlong on January 11th is the right race for last season’s Arkle Trophy third.

After that, the Dublin Racing Festival in February could be on the cards for Articulum, who was third to Janidil in a good handicap hurdle at Fairyhouse at the beginning of the month.

“He ran well, but I was slightly disappointed he didn’t win. I think he should still be able to win off his hurdle mark, so maybe another day,” said O’Brien, who is based in Cork.

“He’s 100 per cent. I’m not sure where he’ll go next. He’s entered in the Paddy Power Handicap Chase at Leopardstown, but I don’t think he’s going to go there.

“He’ll probably go for the Dan Moore at Fairyhouse. That may be the plan now. It’s usually not as competitive as some good handicaps with about 10 or 12 runners. It would be a nice prize to win.

“Then maybe on to Leopardstown for the big meeting in February. He could get a couple of entries there.”