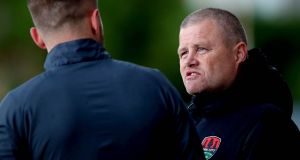 Cork City interim head coach John Cotter: ‘The onus is on us to be on the front foot and that’s when Cork City teams are at their best.’ Photograph: Ryan Byrne/Inpho

An attractive tie with Steven Gerrard’s Rangers is all but confirmed at this stage for the victors of this Europa League qualifying clash between Cork City and Progrès Niederkorn.

Rangers defeated St Joseph’s of Gibraltar away from home 4-0 in the first leg on Tuesday night and their place in the second qualifying round is effectively secured.

As mouthwatering a prospect as that sounds, Cork must not overlook the test posed by the side from Luxembourg, who survived a scare against Cardiff Metropolitan University in the preliminary round, going through on away goals.

Niederkorn finished fourth in the Luxembourg top flight last season. However, they had enough about them to knock Rangers out at this stage two years ago.

The hosts will need to improve on their recent form as they enter this crunch tie on the back of seven matches without a win.

City interim head coach John Cotter said he wanted his side to take the game to the visitors from the get go in the first leg at Turner’s Cross on Thursday night.

“We’d have watched a lot of videos of them and they’re a good side. These sides are generally technically very good and we have to press them well and then be good with the ball when we do get it.

“We have to try to stamp our game on to them, the onus is on us to be on the front foot and that’s when Cork City teams are at their best.”

After naming a much-changed line-up for a friendly against Seán Maguire’s Preston on Monday, City expect to have close to a full squad to choose from on Thursday. New signings Joel Coustrain, who made his debut in Friday night’s draw with Bohemians, and Mark O’Sullivan are also available.

1 Frustration for Lowry and McIlroy as Li leads at US PGA
2 Wolves found in breach of financial fair play rules by Uefa
3 Michael Walker: Pressure mounts on Barcelona to stop slide
4 Sene Naoupu turning mind back to rugby after health scare
5 Rubber about to meet the road as counties weigh up financial hit
Real news has value SUBSCRIBE
Here is your handy guide to sport on television this week