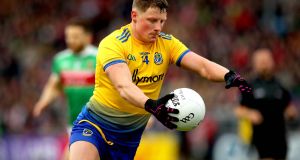 Roscommon’s Conor Cox: “He came in, was very, very relaxed, and I think his football skills speak for themselves.” Photograph: Ryan Byrne/Inpho

Enda Smith has already enjoyed some memorable victories in his 24 years, and they haven’t all been in the Roscommon jersey.

Winning the Sigerson Cup with Dublin City University (DCU) back in 2015 also stands out, the victory over UCC on their home Cork turf as memorable these days for someone Smith was playing with as well as against.

Older brother Donie was also on the DCU team, the one-point win, after extra-time, enough to hold off a UCC team that included their star forward Conor Cox, also of the Listowel Emmets club and already making a name for himself in Kerry football circles.

No way could Smith have imagined it back then, but roll on four years and he and Cox are both at the front of the Roscommon forward line. Cox is actually their top scorer so far in the Championship, hitting 0-15 (six frees) at full forward as Roscommon marched their way towards a second Connacht football title in three years.

“To be honest, no, of course I never thought we’d ever be playing together,” says Smith. “I actually knew Conor from playing against him in college, when he was at UCC, and I was at DCU, and we would have met a good number of times, had some good battles.

“I knew he was a quality player, but then him coming into the panel, when you hear he wasn’t playing with Kerry, you wonder ‘will he be a squad player’, and ‘will he play at all’, but he fitted seamlessly into the group.

“Outside of football he’s a top fella, and that made a huge difference. He came in, was very, very relaxed, and I think his football skills speak for themselves.

“He’s one of the sweetest strikers of the ball, and the frees he’s hit too. He’s done that in the league, so it was no surprise that he’s been doing that in the Championship. But he’s been a real, real boost for us, and we probably wouldn’t be where we are without him.”

High praise indeed from Smith, but then Cox did come to Roscommon with some notable scoring credentials from his days with Kerry and UCC. He was UCC’s top scorer when they won the Sigerson Cup the previous year, and in helping Kerry win Munster and All-Ireland Junior titles in 2012, 2015 and 2017 he scored 4-64 in 13 games across those three campaigns.

His transfer to Roscommon over the winter was a little more complicated than it should have been. Unable to secure any regular game time with Kerry under then manager Eamon Fitzmaurice (he last played a senior match for Kerry in the 2016 league, ironically coming on as a substitute against Roscommon), he looked to his Roscommon connections, his father Martin originally hailing from the Éire Og club in Roscommon, briefly emigrating to America, before returning to live in Kerry, Cox’s mother Anne a native of Moyvane.

Initially Cox transferred to Éire Og, but the club championship structure meant he would have been ineligible for the county until after this summer: only then did he realise was eligible to play for Roscommon under the parentage rule so he actually transferred back to Listowel Emmets.

Once new Roscommon manager Anthony Cunningham was in charge, the call came through and the move was complete. Based in Dublin, Cox straight away settled into the Roscommon set-up, hitting 1-25 in the Division One league campaign, Smith’s description of him being “one of the sweetest strikers of the ball” showed in the Connacht final win over Galway, and he kicked scores off his left and right boot.

“Yeah, ridiculous,” says Smith, “and he was getting a lot of stick for the one he took from the left, alright, because he thought I was on the back post. But he swore to me that he meant it. And he kept saying, ‘no matter what they say, tell them I meant it’. I’ll hold him to that.”

But did he mean it?

“He has it in his locker alright. I don’t know if he meant there and then, but he can do it, yeah.“It’s all a bit crazy though. The same with Anthony Cunningham. It was only after the Connacht final last year that I met Anthony for the first time at that event, and a year later he’s my manager, and we win a Connacht title.

“Same with Conor now. I knew there was some Roscommon connection there, I just didn’t know how strong it was. Like, he was in with Kerry at the time, and I thought ‘nah, he’ll never come up with us’. Even geography wise it just seemed a bit mad. But it’s funny to be playing with him now, and almost like we know him for years.”

Saturday’s Super-8s opener at home to Tyrone at Dr Hyde Park will put that relationship to the next test.

Smith is also conscious of the fact his brother Donie is eager to start too. “I think with Donie he’s mature enough now. He’s obviously older than me. He’s been around the panel for years. I think he realises it’s a panel game.”