Megan Rapinoe to Trump: ‘Your message is excluding people’ 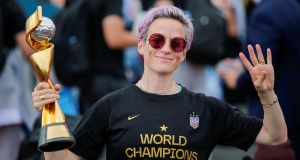 Megan Rapinoe has said she stands by her decision not to accept a potential White House visit after the USA’s World Cup win. Photograph: Eduardo Munoz/Reuters

The US women’s soccer co-captain Megan Rapinoe has delivered an uncompromising message to Donald Trump, amid ongoing controversy over a possible visit to the White House by the World Cup champions.

Rapinoe has been outspoken about LGBT rights as well as racial and gender equality. After the US won the World Cup for a record fourth time on Sunday, Rapinoe called for progress on equal pay for the male and female teams.

She has previously said she would not be going to the “fucking White House” if her team won the World Cup, prompting an angry response from Trump on Twitter.

The US president warned Rapinoe not to “disrespect” her country: “Women’s soccer player, @meganrapino, just stated that she is ‘not going to the F ... ing White House if we win’. Other than the NBA … teams love coming to the White House. I am a big fan of the American Team, and Women’s Soccer, but Megan should WIN first before she TALKS!

“Finish the job! We haven’t yet … invited Megan or the team, but I am now inviting the TEAM, win or lose. Megan should never disrespect our Country, the White House, or our Flag, especially since so much has been done for her & the team. Be proud of the Flag that you wear. The USA is doing GREAT!”

After the US win on Sunday, he backtracked on that offer, saying: “We haven’t really thought about it … We’ll look at that.”

On Tuesday, Rapinoe said she had accepted an invitation from the Democratic congresswoman Alexandria Ocasio-Cortez, among others, for the US women’s soccer team to celebrate its World Cup victory with a visit to Congress.

Rapinoe expressed regret for excessive swearing but stood by her decision to turn down a visit to the White House.

“I don’t think anyone on the team has any interest in lending the platform that we’ve worked so hard to build, and the things that we fight for, and the way that we live our life … I don’t think that we want that to be co-opted or corrupted by this administration,” Rapinoe told Cooper.

She added that allowing the White House to “put us on display” didn’t “make sense for us at all”, adding: “There are so many other people that I would rather talk to and have meaningful conversations that could really affect change in Washington than going to the White House.”

She added: “You have an incredible responsibility as the chief of this country to take care of every single person, and you need to do better for everyone.”

Rapinoe spoke out after the US claimed their fourth World Cup with a 2-0 victory over Netherlands in the final, in Lyon, on Sunday. England’s Lionesses were knocked out by the US team 2-1 in the semi-final.

Reality Bites - Tales of the new normal: Andrew Coscoran 11:41
Marcus Rashford fighting to keep free meals on the menu for children 10:56
Shane Lowry: Global nature of golf could cause issues when game returns 10:45
All in the Game: Belarus plough ahead despite global pandemic 10:00
The Offload: Sports stories from the frontline 10:00

1 Ken Early: Despite coronavirus, Premier League season must be finished if at all possible
2 My favourite sporting moment: When Zidane glided through Brazil in 2006
3 Favourite sporting moment? It’s a bit like choosing your favourite child . . .
4 Summer tours next in line for postponement as rugby assesses options
5 Police investigating after Jack Grealish is pictured at a road incident
Real news has value SUBSCRIBE
Crossword Get access to over 6,000 interactive crosswords