Bookies got it ‘hopelessly wrong’ when ad regulations were relaxed 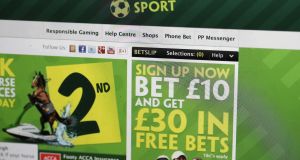 Paddy Power’s advertisements are some of the most controversial in the gambling industry. Photo: Matthew Lloyd/Bloomberg via Getty Images

Sports gambling is becoming increasingly ingrained in social culture in Ireland with technology the driving force behind it, but the issue on the other side of the world in Australia is significantly bigger.

Australians lost A$24 billion (€15 billion) on gambling in 2017 with more than half of that lost on poker or slot machines at pubs and clubs.

While sports betting is not the number one form of gambling in Australia like it is in Ireland, ‘pokies’ – as the locals call the machines – have contributed to an estimated 200,000 people across the country developing “a high-level problem” with gambling.

In the table which shows Ireland as being the third biggest losers per capita in the world, Australia sits at number one with everyone in the country down an average of €930 per year. This has prompted action from the government and a major part of the response has come in the area of advertising.

Since March 30th, 2018 a ‘siren-to-siren’ ban on gambling advertising has been in place in Australia meaning that all gambling adverts are prohibited during live sports broadcasts between 5am and 8.30pm.

The ban is specifically aimed at limiting children’s exposure to gambling and is something that the Labour party in the UK have included in their recently released manifesto while both Philip Bowcock (William Hill CEO) and Kenny Alexander (Ladbrokes and Coral CEO) have also called for similar regulation.

Such a watershed ban is something that is supported by Paddy Power co-founder and former chief executive Stewart Kenny who believes gambling advertising has gone too far and is now putting children at significant risk.

Kenny resigned from the board of the bookmaker in 2016 citing failures within the industry to properly tackle problem gambling.

And now he says the bookmaking industry got it “hopelessly wrong” when they campaigned to have regulations around gambling advertising (set out in the 1931 Betting Act) relaxed.

“All of us in the betting industry pushed for liberalising the gambling advertising regulations years ago and it is time to admit we got it hopelessly wrong,” Kenny says.

“The amount of advertising around live TV sport is normalising gambling for kids. The research from Australia shows this is leading children into gambling at too young an age.”

That study in Australia, carried out by researchers at Deakin University, found that children as young as eight are able to recall bookies’ names and promotional offers.

“Children are very easily able to tell you that if you bet on a certain outcome of a game, if your team kicks the first goal but then go on to lose, that they now expect to get money back on those offers,” study co-author associate professor Samantha Thomas said.

“What that does is it suggests to kids that you can’t lose from gambling.”

Kenny says the similar levels of gambling advertising in Ireland is “glamourising” betting for children and means that “parents can’t sit down with their kids and watch sporting events any longer.

“I don’t think any parent in the country really appreciates that their children are being bombarded with this amount of gambling advertising when they are watching sport on TV. I don’t even think it’s in the interests of the betting industry because I think it’s alienating them from all the parents in the country. It’s time for the gambling industry to unite and call for a watershed to be introduced.”

In Italy they have gone for the even more radical option of banning all forms of gambling advertising – except in the case of the national lottery – from January 1st 2019.

While there have been calls for similar actions in Ireland, the legislation around gambling is extremely outdated.

The current laws in place are dictated by the Betting Act of 1931 and the Gaming and Lotteries Act of 1956. These laws were put into place when vast swathes of the country didn’t even have electricity and yet they are still in place at a time when anyone can gamble away every cent they have in a matter of minutes from a device in their pocket.

Indeed the current legislation states that the maximum stake anyone can spend in an arcade is sixpence and the maximum payout is 10 shillings.

A new Gambling Control Bill has been delayed in the Dáil since 2013 but there has been some movement on it over the last year. David Stanton, the Minister of State in the Department of Justice and Equality with special responsibility for gambling, indicated at the start of the year that the bill would be drafted and published by the end of this year.

The Government earlier this year also approved the establishment of an independent regulator for the gambling industry to deal with licensing, regulating, monitoring, inspection and enforcement of the sector.

When contacted by The Irish Times about whether the new bill would include any regulations around the advertising of gambling, a spokesperson said: “It would not be appropriate for the Department to comment on current or proposed regulatory practices in other jurisdictions. The issue of advertising gambling services, and of related sponsorship and promotional activities will be addressed in the revised General Scheme of the Gambling Control Bill.”

However, they did reiterate that the working group is preparing its report for submission to the Government in autumn this year.

This news comes months after President Michael D Higgins called for a ban to be introduced on gambling advertising.

“If I had my way, I wouldn’t have advertising of any access to gambling platforms in sport at all. I really worry when I read the cases,” the President said.

“I visited the Hope House in Mayo recently who have been a great assistance to some people who have got over what is, hopefully, a terrible temporary problem. I think in a way we should protect our sports by keeping them free from this kind of stuff.”

But is simply banning it really the solution? People who bet will still bet whether it’s advertised or not. In fact, there is evidence to suggest an all-out ban would only increase the issue.

“In the old days I think gambling companies would have welcomed a ban on advertising,” says Professor David Forrest of the University of Liverpool management school.

“I recall a well-known economic study which showed that the ban on tobacco advertising on television in the US was followed by the most profitable years ever for tobacco companies because, essentially, they were spending a lot of money cancelling out each other’s efforts to get market share.

“So someone comes in and arranges that you stop this self-destructive arms race that was destructive to profits. They would have also been keen on a ban in the old days because it’s a big barrier to entry because how can a new brand establish itself if it can’t advertise?”

It’s becoming increasingly difficult to get away from the promotion of gambling. In these very pages you will see tips for horse racing, in many tabloids there will be free bets given out around the time of Cheltenham and big racing festivals while Newstalk’s Off The Ball now include a weekly slot in association with Boylesports and carry links on some tweets for new customer offers with the bookmaker. Bookies’ representatives also regularly appear on RTÉ’s racing coverage.

In many ways the horse has bolted and it’s now just a case of containing the problem.

“There’s no reason why we can’t find the balance because it is there and it is part of society,” says Tony O’Reilly, co-author of Tony10 which charts his descent into problem gambling, rehabilitation and a prison sentence.

“You’re not going to stop it at this stage because it’s huge business so that’s why we need to educate people about it. The ads we see all the time now are the ones about texting while driving so something like that would help.

“I’d be more inclined, if I was gambling, to go with a bookie who is proactive about problem gambling. I never set out to be a problem gambler, I set out to have fun and if I know that a certain company is very proactive in it I’ll use them. So they can use advertising on the flip side for that to put themselves ahead of the crowd. Why not advertise that side of it and show that they’re proactive with responsible gambling?

“Why not work with it and use the power of advertising to put out more of a balanced view and to educate?”