Betting firms ‘should be taken out of sports sponsorship’ 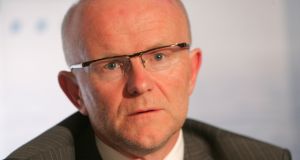 Former chairman of Paddy Power Fintan Drury said: ‘You cannot have booze advertising on television in this country until a certain hour of the evening, but you can have gambling.’ File photograph: Frank Miller

Betting firms as well as alcohol companies should be taken out of sports sponsorship to help combat gambling addiction, a conference on ethics in sport has heard.

Sports agent Fintan Drury said it was “a scandal that we have a situation where broadcasters are allowed to promote gambling companies during the afternoons before the watershed that applies to booze”.

Mr Drury, a former chair of betting group Paddy Power, told the fourth conference on ethics in sport hosted by the Department of Religions and Theology at Trinity College Dublin there was “a massive job of work to be done in terms of taking booze companies and betting companies out of sport”.

“It won’t come from the politicians because there’s too much tax revenues at stake and it actually has to come from grassroots. It’s not going to be easy. They’ve already failed to do it with regard to booze. So if we could get them mobilised from the grassroots, I believe that’s the only way we can get things to change,” Mr Drury said.

He was speaking after former Armagh footballer Oisín McConville spoke movingly about his own struggle with a gambling addiction, for which he eventually went into treatment at the age of 30.

Mr Drury said there were people in the room who probably had younger brothers or sisters, or children, watching sports in the afternoon on television.

“You cannot have booze advertising on television in this country until a certain hour of the evening, but you can have gambling.

“If we’ve heard anything from Oisín today, we’ve heard that addiction applies across more than just alcohol. It is a scandal that we have a situation where broadcasters are allowed to promote gambling companies during the afternoons before the watershed that applies to booze.”

Mr Drury said McConville’s testimony was “outstanding” and that he should be given great credit for addressing his difficulties as openly as he did.

Asked if wearing a jersey with the betting firm’s name on it had been a problem for him as a player who had dealt with a gambling addiction, McConville admitted it had been a “moral dilemma”.

He had been asked, as captain, to pose for a photograph related to the sponsor at the time and he “couldn’t do it”, he said.

“I didn’t think ethically it was the right thing for me to do. I didn’t think I should have been asked but I didn’t get into that [with the club]. At the end of the day the people in the club are volunteers and they’re probably not thinking along the same lines I’m thinking.”

But he said he had “two choices” – to either wear the jersey or walk away from football.

“I thought for my mental health, the best thing that I could do was remain playing football. It wasn’t ideal. I didn’t expect it to last 10 years.”

McConville said he had, at just 14 years of age, become a “compulsive gambler and a compulsive liar”.

The addiction had left him financially and emotionally bankrupt and had taken his relationships and friendships away from him, he said.

His 13 weeks of treatment were the best weeks he had ever spent in his life, he said. He urged everyone to “take charge” in their own lives and to step back and see what direction their life was going in.

“In treatment, I realised this was not the direction I wanted my life to go.”

The All-Ireland winner and former All-Star said there was now a “huge amount of help out there” for people with addiction issues and that the GAA itself was in a better position than ever in being able to offer that help.

He said “99 per cent” of clubs now had a health and wellbeing officer and that every club in the country was doing something to alleviate the issue.

The conference organiser Dr John Scally said the aim of the conference was to begin a national conversation on the important issue of ethics in sport.