Ireland fans frustrated at lack of tickets for Denmark clash 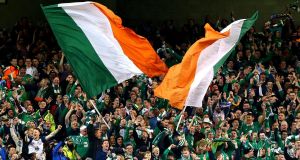 Only a small fraction of Irish fans travelling to Copenhagen for Ireland’s World Cup playoffs will actually be in the ground. Photo: Donall Farmer/Inpho

There was disappointment on Wednesday for the vast majority of supporters who applied for tickets for the first leg of Ireland’s play-off in Copenhagen on Saturday week with only a tiny proportion of those hoping to attend actually getting seats from the FAI.

Of 2,300 tickets obtained for the match, it seems that around 980 were earmarked for supporters of which less than half were allocated to those who travel independently to games and are not affiliated to any official supporters’ club.

For this “independent” sector, the minimum requirement for an application to be sure of success was attendance at six away games over the last two campaigns plus possession of a season ticket for Ireland’s matches at the Aviva stadium. A portion of those who attended five also got tickets with the rest apparently on a “priority waiting list”.

The numbers of Irish supporters travelling to away games fluctuates hugely according to the importance of the game, size of stadium, ease of access and attractiveness of the destination but only a very small number of fans have both the dedication and resources to be genuine regulars.

Independent supporters group YBIG point to the games in Georgia (twice), Bosnia and Herzegovina, Serbia and Moldova as having posed the greatest problem when it comes to amassing the required loyalty points. Tbilisi, for instance, was relatively time consuming and expensive to get to while Ireland’s total allocation for the play-off game in Zenica two years ago was just 880, a little over a third of what was received from the Danes.

There was anger among some of those who missed out this time that so many tickets are swallowed up by members of the “football family”, a catchall term generally taken to describe officials from clubs and league who are subject to no attendance requirements, as well as premium tickets holders, sponsors, FAI board members and other senior officials. Fifteen percent of tickets go to Abbey Travel who bundle them into packages.

The association said lon Wednesday night that the most dedicated fans had been looked after but that, given the importance of the game and limited supply due to the relatively small size of the stadium, it was never going to be possible to meet demand.