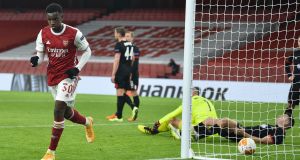 Any hope of a shock for the ages at the Emirates last night were put to bed with a six-minute three-goal blitz for Arsenal as Eddie Nketiah, Joe Willock and Nicolas Pépé struck on either side of half-time to see off Dundalk. Filippo Giovangoli’s side looked to have made it to half-time at 0-0 and still in with a chance of picking something up in London but Nketiah’s goal in the 42nd minute and Willock’s two minutes later put paid to that. Directly from the restart of the second half Pépé curled a beautiful finish past Gary Rogers and with that Arsenal were able to cruise to victory. In her TV View column Mary Hannigan writes that, despite Mikel Arteta playing the players he has had up on Done Deal for the last few months, Goliath didn’t have an off-day. In the night’s other games there was disappointment for Celtic who threw away a two-goal lead in Lille to draw 2-2 while Spurs were beaten 1-0 in Belgium by Royal Antwerp.

Moving on to rugby and, with this Saturday’s big match between Ireland and France looming, Ronan O’Gara says Ireland must be braver than usual in this final game shootout. As coach at La Rochelle O’Gara has a good vantage point for the French game and he says that “they have a game plan and certainly in the backs they have more X-factor players than any of the other nations. [Antoine] Dupont is comfortably the best ‘9’ in the world I think. [Virimi] Vakatawa and [Semi] Radradra are on a different level playing in the ‘13’ position and [Gaël] Fickou I like a lot.” Meanwhile, Ireland’s Conor Murray is sounding a cautious note ahead of Saturday’s match as he knows all too well from previous experience the dangers of facing France in Paris.

On to GAA and this morning Jackie Tyrrell writes that the hurling championship is back but the physicality seems to be missing. The former Kilkenny man says last week’s clash between Clare and Limerick was great to watch but, in an empty stadium, it lacked a lot of the intensity of such a high stakes Munster Championship fixture. “There’d have been roaring from the crowd, for a start. Somebody from the Limerick set-up would probably have been getting involved, stirring the whole thing up. There would have been a squeeze put on the player, on the ref, on Lohan, on the whole situation. But instead, it was, ‘Right lads, no panic, whenever you’re ready,’” he writes. This weekend it’s the turn of the football championship to get underway and this morning Seán Moran speaks to former Louth player and manager Peter Fitzpatrick who remembers the heartbreak of that controversial loss to Meath in the Leinster final in 2010 while also sounding positive notes ahead of this year’s championship with a difference. Meanwhile, Malachy Clerkin speaks to Darragh Ó Sé and Kevin McStay about their memories of knockout football where you can be beaten and on the way home before you even know it.

In cycling there was disappointment for Sam Bennet yesterday as he was stripped of a second stage win at this year’s Vuelta a Espana for being too aggressive in the final sprint – a decision he was understandably a little confused by afterwards.

Finally to golf and Pádraig Harrington displayed more good form yesterday in his first PGA Tour appearance since March as he carded a four under par round of 67 at the Bermuda Championship. It leaves him four shots behind leader Peter Malnati while Séamus Power sits at two under after a round of 69.