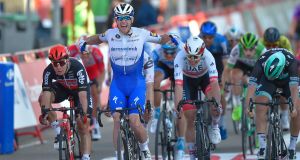 Ireland’s Sam Bennett celebrates as he crosses the finish line to win stage 9 of the La Vuelta from Castrillo del Val to Aguilar de Campoo, a win that was later wiped out. Photograph: Ander Gillenea/AFP via Getty Images

On the first approach everything and everyone appeared reasonably aligned and all Sam Bennett had to do was work his magic, riding off the front of the bunch sprint that marked the expected hectic finish to stage 9 of the Vuelta a España.

“It was a big fight,” Bennett said in the immediate post-race interview at Aguilar de Campoo, at that point still believing he’d won his second stage of this race, and ninth Grand Tour win in all, but perhaps hinting at something else too. “We had some guys nearly put us in the barriers trying to take the wheel, so it was a bit sketchy . . . ”

A bit sketchy indeed, because on the second approach – or rather the overhead race replay – Bennett was seen to make head and shoulder contact with the Latvian rider Emils Liepins, just under 1km from the line, not once but twice.

In the end it still seemed the only danger was that Bennett was making it look easy, sitting up on his bike at the line and affording himself the worthy celebration. However, Liepins, the 28-year-old from Trek-Segafredo riding his first Grand Tour and hardly known for his sprinting prowess, then raised the matter with the race commissaries. They in turn showed little hesitation in relegating Bennett for “overly aggressive riding” to the back of the main group of the stage, in this case 110th – the stage awarded to second-placed Pascal Ackermann, of Bennett’s former team Bora-Hansgrohe.

The issue appeared to be twofold: Liepins was trying to ride onto what remained of Deceuninck-QuickStep’s lead-out train, at the same time in danger of boxing Bennett, sitting sixth, into the race barrier to his right, just before another final gentle right turn before the final line. As it turned out Bora-Hansgrohe mostly controlled the final lead-out train, and Liepins ended up 13th on the stage.

Still the outcome is a familiar scenario: on Stage 11 of the Tour de France, the commissaires similarly relegated Peter Sagan, also of Bora-Hansgrohe, to the rear of the peloton after a dangerous move in the sprint, where he was seen to shoulder-barge into Wout van Aert of team Jumbo-Visma.

In addition, the UCI had promised to be extra vigilant of overly aggressive sprinting after another of Bennett’s team-mates at Deceuninck-Quick Step, Dutch cyclist Fabio Jakobsen, was involved in a horrific crash in a stage finish of the Tour of Poland in August, colliding with the barriers at high speed and ending up in a medically-induced coma.

It will hurt Bennett in another way, though, after he initially believed he had taken his 50th career victory and 100th Grand Tour stage stage for Deceuninck-Quick Step, before his team also confirmed: “After a complaint from another team, whose rider tried to barge into Sam’s train, who defended his position, Sam has been relegated by the race commissaires.”

Last Friday, Bennett did help secure back-to-back stage wins for two different Irish riders for the first time in Grand Tour cycling history, after Dan Martin’s win on stage 3. So it wasn’t yet his Grand Tour stage win number nine – to go with his two in the Tour this year, including the last stage on the Champs-Élysées, two in the Vuelta last year, and three in the 2018 Giro d’Italia, with a few runner-up positions too.

His Deceuninck-Quick Step had been carefully controlling the peloton from as far out as 85km to go; Ackermann did have a minor crash some 100km from home, tangling with Hector Saez (Caja Rural-Seguros RGA), though both got promptly back on their bikes, and it proved to be the German rider’s day.

“When I saw the video behind, it wasn’t a fair action of him [Bennett],” said Ackermanm, who himself was relegated from the bunch sprint at Scheldeprijs earlier this month. “I think in those cases, after all the crashes the last few weeks, we have to take care of the other guys. I feel sorry for Sam, but I am really happy for the win, and for my team, who rode a lot at the front today. And finally my first stage win in the Vuelta.”

It was no great wonder the day was an otherwise entirely casual grind down the 157km from Castrillo del Val, in fairness the first properly handy stage since the race start last Tuesday week. That bunch finish also means no change in the leader’s red jersey at the stage 9 finish; Primoz Roglic (Jumbo-Visma) had moved closer to Richard Carapaz of Ineos Grenadiers on Thursday, but the Ecuadorian holds on to La Roja with a 13-second advantage on the Slovenian champion, with Martin of Israel Start-Up Nation still third (+28’).