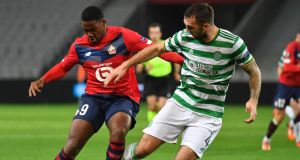 Celtic let slip a two-goal interval lead to draw 2-2 with Lille in their thrilling Europa League encounter at the Stade Pierre Mauroy.

Neil Lennon’s side were under the spotlight after losing to Rangers and AC Milan in their first Group H fixture before drawing 3-3 with Aberdeen at Pittodrie on Sunday but they raced into a two-goal lead through attacker Mohamed Elyounossi who scored twice in a four-minute spell in the first half.

Hoops goalkeeper Scott Bain, preferred to Vasilis Barkas, saved a Jonathan David penalty five minutes before the break and it looked like it was going to be Celtic’s night but Lille dominated in the second half.

Defender Zeki Celik pulled a goal back in the 67th minutes and Jonathan Ikone levelled in the 75th minute with Celtic hanging on for a valuable point although they will feel it should have been more.

Gareth Bale and Dele Alli were among those handed a start in Belgium, but a poor first-half display saw them trail to Lior Refaelov’s 29th-minute strike.

Mourinho did not like what he saw and Alli was one of four men hauled off at the break, the second time in three starts this season he has not made it out for the second half.

Ring-rusty Bale lasted only 58 minutes as Mourinho resorted to bringing Harry Kane on, with in-form Son Heung-min one of those already having been sent into action.

Even that duo, who have been in deadly form so far this season, could not spare Tottenham’s blushes as they were beaten for the first time in 10 games.

Antwerp, leaders of the Belgian Pro League, were well worthy of their win, which could have been more handsome, and they remain unbeaten at home in 14 months, taking an early lead in Group J.

Jamie Vardy inspired Leicester to a nervy victory at AEK Athens as the 33-year-old became the Foxes’ oldest European goalscorer after netting from the spot in a 2-1 win.

Muamer Tankovic netted after the break to make it an anxious evening before missing a golden chance to make it 2-2.

Cengiz Under hit the bar but the Foxes survived an improved second-half performance from the hosts.

They remain join top with Braga, who beat Zorya Luhansk, with the Portuguese side travelling to the King Power Stadium next week.

Marko Livaja wasted good AEK chances and, while Leicester failed to find top gear, they had enough to win.

Alfredo Morelos equalled Ally McCoist’s European goalscoring record for Rangers as the second-half substitute netted the only goal against Lech Poznan at Ibrox.

The Colombia striker powerfully headed home a wonderful Borna Barisic cross in the 68th minute to take his European tally for Rangers to 21 goals.

Morelos had come off the bench six minutes earlier and quickly enhanced Rangers’ threat with the aggression they had been lacking in the final third.

The goal was enough to earn Gers an eighth straight win in all competitions and put them in a commanding position alongside Benfica in Europa League Group D with both sides on six points from two matches.