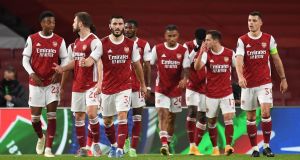 “Even Goliath had an off day,” Virgin Media’s Des Curran reminded the Dundalk faithful, lest they be fearful about their lads’ Europa League trip to London, while Niall Quinn stressed the importance of the players leaving their respect for Arsenal “on the bus”. Brian Kerr, though, took one look at the Arsenal team-sheet and wasn’t convinced at all that there was anything Goliath-ish about it, reckoning the sling-wielding Dundalk Davids wouldn’t be shaking in their boots.

Mikel Arteta had, after all, opted to leave his larger guns – Bellerin, Tierney, Gabriel, Saka, Ceballos, Lacazette, Willian, Aubameyang, Thomas, and the like – sitting on the bench, with the selection of Mustafi, Kolasinac and Elneny in particular suggesting that, for all his respectful pre-match words about Dundalk, he believed picking players who he’s had up on Done Deal for months would suffice to the do the job against the Irelanders.

“You wouldn’t be too unhappy with the side they’ve picked,” said Kerr, the only disappointment for Dundalk the absence of the injured David Luiz, thereby denying them at least one penalty and own goal.

Des, though, pointed out that eight of the Arsenal starting lineup were full internationals, just in case we viewed them as the Dog and Duck reserves, while extensive research – a Twitter click – revealed that the value of the Arsenal squad called up to duty for the game was £569m, compared to the £2m value placed on the Dundalk squad by the Transfermarkt people. Not that football is a game of the haves and haves not, or anything.

Included in the Dundalk XI was Michael Duffy who, when asked pre-match, what name he had chosen for his confirmation, confessed that he had gone for ‘Thierry’, because he was a monster Gooner.

“They said no at the start, but the teacher came back and said he was a saint so ‘you can have it!’”

Thierry Duffy conceded that Le Handball was an awkward moment in his life, but seeing as he was only 15 he had bigger things to be thinking about, like spots and girls and stuff. “Let’s all pray to Saint Thierry,” said Tommy Martin, beseeching the heavens to intervene to let the Dundalk Thierry and his mates have a night to remember at the Emirates.

Like, Tommy reminded us, when Dundalk became the only Irish club in history to not lose to English opponents in European football, when they drew with Spursy back in 1981. Did Spursy put out a Done Deal XI? Did they heck: Clemence, Hughton, Miller, Roberts, Hazard, Perryman, Ardiles, Archibald, Galvin, Hoddle, Crooks.

That was then. But 42 minutes in to this encounter, you’d have begun to wonder if it might be 1981 all over again, another North London behemoth slayed. Well, drawn with.

Over on BT, Ian Darke nearly fell out of his seat when Patrick McEleney tested the lazily christened Runar Runarsson from distance early doors, the oft-times boxing commentator beginning to wonder if Dundalk were the Buster Douglas of the Europa League.

“Is this the game you thought you’d be seeing tonight,” he asked his commentary box colleague Karen Carney. “It is, yeah,” she replied. She, despite not possessing a willy, having done her research on Dundalk and their defensive capabilities and being familiar with their strengths.

All going well, then, until that handful of minutes either side of half-time. You can blame that Virgin caption: “They’ve Dun Okay.”

Goliath bowled out the Dundalk Davids in the end, then, but not without having to contend with a googly or two. Thierry Duffy possibly ended the night with mixed feelings, a win-win kind of a situation. A handy outcome, that.

1 It’s shocking how men have driven women away from exercising in public
2 The Offload: Shane Horgan pulls no punches as the podcast wars rage on
3 Ken Early: Maradona’s wonder goal a monument to lost freedom
4 Joe Canning discharged from hospital on Sunday night
5 Nicky English: No surprise that Limerick and Waterford in final
Real news has value SUBSCRIBE
Crossword Get access to over 6,000 interactive crosswords