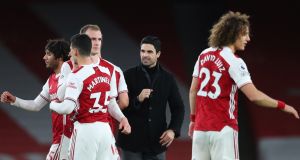 Arsenal are back in the top half of the Premier League after a 3-0 win over Newcastle last night. A brace from Pierre-Emerick Aubameyang and a Bukayo Saka goal sealed a comfortable 3-0 win at the Emirates. Celtic manager Neil Lennon has castigated an “absolute barrage of hypocrisy” he believes is attached to criticism of his club’s ill-fated training trip to Dubai.

Tadhg Furlong could return to action in the next fortnight as the Lions, Ireland and Leinster tighthead prop has embraced a substantial training load as he nears a return to competitive rugby. In his column this morning Gerry Thornley explains why the IRFU must grasp the window of opportunity for the club game: “Maybe it’s time the top division went semi-pro? Maybe there could be an amalgamation or two for the top tier of the AIL only while retaining separate status, i.e Galwegians and Corinthians competing as the City of the Tribes? Whatever it takes.”

10 What a work-from-home space should cost: Converted attic, garden office or spare room

11 Finn McRedmond: Wokeness is dying, another victim of the pandemic

19 Davy board to search for other potential cases of wrongdoing

28 I, Tonya reveals a deeper truth than Harding’s level of guilt

35 Long Covid in children: New data is cause for concern, scientists say

40 ‘I don’t even know when I was born’: Scale of illegal adoption is hard to take in