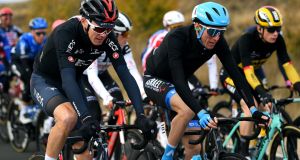 Between them they’ve already featured in 35 Grand Tours, Chris Froome winning seven in the increasingly distant past, including the Tour de France four times, Dan Martin falling just short of the podium in his most recent attempt, the 2020 Vuelta a España.

Now, even if approaching the endgame of their careers, both Froome and Martin believe by riding together on the same team for the first time their combined efforts may result in winning one more: it’s just not yet clear if the British or Irish rider will be considered team leader at Israel Start-Up Nation.

Martin is starting his second season with the team, Froome coming on board after 11 seasons with Team Sky/Ineos, only for now there’s no questioning the rider in form. Martin also won Stage 3 of the Vuelta, while Froome lost 11 minutes the first day, eventually finishing in 98th position, over three and a half hours down on winner Primoz Roglic.

Indeed Froome hasn’t yet returned to full training, joining the 2021 Israel Start-Up Nation team presentation on Monday via a video link from California, where he’s continuing his rehab mostly off the bike, while Martin joined via the team training camp in Girona, in Spain.

“It’s my second year in this team now, and really happy is this team is still strengthening,” said Martin, who turns 35 this August, his fourth place finish in the Vuelta, having sat in third for the first two weeks, still the best Grand Tour finish by any Irish rider in 32 years, after Seán Kelly won the Vuelta outright in 1988.

“It’s never a bad thing to have team mates by your side in the final (days) of these races, and to be surrounded by the strong riders that we now have in this team, who will in the start line this year.

“I also know how much I can learn from riders like Chris, and also Mike (Woods, the former EF Pro Cycling rider and sub-four minute miler who won stage 7 last year’s Vuelta). With the guys who are in this team now, it’s really about sharing knowledge, we can learn from each other, and in that way we become a stronger team together, and I know we can all improve and reach a higher level.

“But it’s a team effort, there’s no room for me to sit here and talk about personal ambition. I want what’s best for the team, and we’re going to work in the best way possible to get those results.”

For Froome, who turns 36 in May, news that Team Ineos wouldn’t be extending his contract beyond 2020 came last July; later that day, Israel Start-Up Nation confirmed the signing of Froome on an “open-ended” deal that will likely see out his career.

Following his hard crash at the 2019 Dauphiné, which meant riding much of last season with screws still in his legs (since removed), Froome still believes he can regain his Grand Tour-winning form, which hasn’t always escaped controversy or indeed suspicion, not least when returning an Adverse Analytical Finding for almost twice his allowed dose of salbutamol, an asthma medication, after winning the 2017 Vuelta, only later to be cleared.

“As I’ve mentioned before, this is not just a short term project for me. This is something I’ve committed to until the end of my career, and the most important thing at this point is to try to get myself back to previous levels, and one of the biggest keys to that is getting back on track, because it wasn’t completed last year as I hoped.

“(Retirement) would have been the easier option but it’s not the way I wanted to finish my cycling career. One big motivation was knowing I was sitting on four Tour de France titles and I didn’t feel as if I’m done yet. I would like to get to number five and keep targeting Grand Tours until I’m ready to retire on my own terms.”