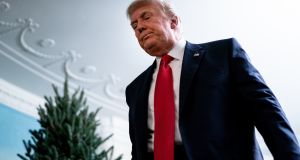 US president Donald Trump: Rejection by voters after a single term in office sends an important message. It proves right-populists can be beaten. Photograph: Erin Schaff/New York Times

Donald Trump’s incompetence and ill-discipline struck fear in the hearts of his opponents, but those shortcomings also put a ceiling on his progress. A more capable proto-authoritarian president would have been more dangerous. That’s true for the world as well as for America itself; had Trump approached the dismantling of alliances and the coddling of dictators in a more systematic, strategic way, the damage would have been more lasting. Were he equipped with any of the qualities of a real leader, rather than being the lazy, inarticulate man that he is, with little patience for government and an endless appetite for self-pity, he could have been a potent figurehead for a global movement built around his brand of illiberal nationalism.

Instead, his ties to the far-right in Europe and elsewhere were looser and more opportunistic. He was less a leader of the “nationalist international” than an enabler who gave populist counterparts legitimacy either directly, by endorsing them or inviting them to the White House, as he did with Poland’s Andrzej Duda on the eve of that country’s election earlier this year, or indirectly, by echoing their demagoguery. Trump’s presidency coincided with the ascent of nationalist parties in Germany, Austria, Italy, Brazil, India, Indonesia, Hungary, Poland and elsewhere. Strongman politicians such as Jair Bolsonaro of Brazil and India’s Narendra Modi learned from Trump’s campaign tactics, and cited his success as proof that their ideas had triumphed. “Their world is collapsing, ours is being built,” said France’s National Front (now the National Rally) after Trump defeated Hillary Clinton in 2016.

And so, just as Trump’s success was a boon to the global far-right, his loss of power will come as a blow to the movement. How it adapts without its American figurehead is one of the most important questions in world politics today. Even allowing for the shifts in thinking on the American centre-left as a response to the right-populist surge, which will likely produce a more protectionist outlook than recent Democratic administrations, the Biden presidency will inevitably have an immediate impact on relations between Washington and Trump’s ideological soul mates. With liberal atlanticists back in power in the US, the conspiracy theorists who run Poland and Hungary, locked in battle with the European Union over their trashing of the rule of law, can expect the Americans to row in behind Brussels and apply pressure accordingly. Vladimir Putin, Recep Tayyip Erdogan and Rodrigo Duterte can expect to pay a higher price for their posturing.

The far-right is not about to shuffle off the stage. Seventy-four million Americans looked at Trump’s first term and decided they wanted another four years of the same

What internationalists really hope, of course, is not merely that Biden will give right-populists the cold shoulder but that his victory will herald a wider decline in the movement’s fortunes. “Trump’s defeat can be the beginning of the end of the triumph of far-right populisms also in Europe,” tweeted the former president of the European Council, Donald Tusk, after the US election.

Trump’s rejection by the voters after a single term in office sends an important message. It proves that right-populists can be beaten, and that they can be beaten not by imitation – a course chosen by many European parties, from France’s Les Républicains to the Christian Social Union (CSU) in Germany – but with alternative ideas. By showing that the progress of the right can be arrested, Biden’s victory has punctured the claim of the populists that their rise is inexorable.

Mainstream politicians of an optimistic bent see in Trump’s loss a reflection of a wider fightback. They see that the far-right’s gains in last year’s European election were smaller than anticipated, that the EU’s resolve in confronting Warsaw and Budapest is growing, and that extremists’ electoral momentum has stalled in several countries. They point out that the tragic limitations of populist leaders, from London to Brasilia, have been exposed by the Covid-19 pandemic. And that the Brexit debacle has done the opposite of what Europe’s far-right claimed it would do: instead of provoking a clamour for withdrawal from the EU elsewhere, opinion polls show it has in fact hardened support for the bloc in most places. Since the Brexit vote, many of Europe’s leading far-right parties, including those in France, Germany, Italy, Sweden, Finland and Denmark, have all either abandoned or diluted their calls for withdrawal.

The far-right is not about to shuffle off the stage. Seventy-four million Americans looked at Trump’s first term and decided they wanted another four years of the same. Trump and his family still hold the Republican Party in an ideological vice-grip; his views on everything from immigration to trade are now party orthodoxy. Leaders such as Bolsonaro and Modi remain very popular. Others, such as Erdogan and Orban, have, through their dismantling of democratic checks, made it much harder for opponents to challenge them. Meanwhile, none of the social or economic causes of popular discontent have gone away and the tech giants continue to show little appetite for the kind of steps required to adapt their technology for the health of democratic debate.

Still, liberal internationalists will take encouragement wherever they can find it. Now, for the first time in years, they feel their world can be rebuilt.