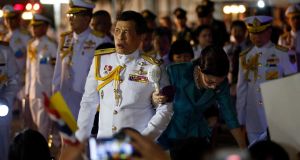 As young democracy protesters in Thailand have broadened the scope of their demands to encompass once-taboo criticism of the king, the government has cracked down using the country’s infamous lese-majesté laws. This week 15 protest leaders have faced charges relating to comments made about Thailand’s King Maha Vajiralongkorn’s lifestyle and rule from his luxury home in Germany. Human rights groups have expressed concern about the suppression of basic rights.

Months of protests about democracy and reform of the constitution have expanded from university campuses to the streets to embrace demands that the monarchy, once considered beyond public criticism, should be accountable. To many Thais, taught from birth to revere the monarchy, such criticism is deeply shocking.

Reviving use of the lese-majesté laws that forbid any insult to the king, Thai prime minister Prayuth Chan-ocha has warned that “all laws, all articles” will be used to respond to protesters, the first time in more than two years that such charges have been filed. Anyone who “defames, insults or threatens the king, queen, heir-apparent or regent” can face up to 15 years in jail on each charge.

Protests have included demands to curb the king’s recently expanded powers and have challenged his decision to declare crown wealth his personal property, making him by far the wealthiest person in Thailand. Yesterday protesters targeted the Crown Property Bureau which manages those assets. There is also anger at the king’s unprecedented decision to take personal command of all military units based in Bangkok.

Vajiralongkorn, currently back in Bangkok, spends months at a time in his villa by Lake Starnberg, just south of Munich, and in spring frequently stays in a luxury hotel in the ski resort of Garmisch-Partenkirchen. He defied a ban on hotel stays in the state at the time of one of Bavaria’s coronavirus lockdowns. His stay in Germany has been uncomfortable for the Merkel government, which has warned that he may be expelled if he issues governing edicts from there.