Debate around pricey towel with hood is socioeconomics swimming against tide 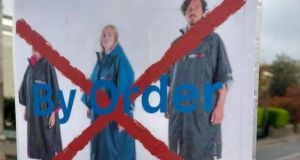 Dryrobe culture war is about aspiration, tribalism, social class and snobbery. Being “highly active” is correlated with higher socioeconomic status, according to a sports report.

There is consternation among some residents of south county Dublin over an influx of undesirable newcomers. There are mutterings on social media that the streets of Sandycove and Dun Laoghaire are “littered” with the new arrivals. A sign briefly appeared on a lamp-post near the Forty Foot swimming spot. “By order: No Dryrobe or Dryrobe types.” Another followed shortly after: “Warning! Bathers are advised that sightings of Dryrobe w*nkers have increased in this area.”

The Dryrobe (or “dryrobe” if you’re determinedly on brand) is a changing robe. But as any Dryrobe-wearer will tell you – probably at some length if you let them – it’s not just any changing robe. What might politely be called its aesthetic shortcomings are more than compensated for, they insist, by its unparalleled warmth and practicality. These qualities are ostensibly the reason it has become an acceptable form of outerwear: Dryrobes have been spotted as far from their natural habitat as Dunnes in Cornelscourt.

The citizens of Sandycove, particularly the ones who’ve been swimming year-round since long before wearing a luxury outdoor slanket while slugging a takeaway mojito was a thing, are not impressed.

The Dryrobes culture war isn’t really about what you wear when you’re getting changed after swimming (that’ll be “wild swimming” to Dryrobe-wearers), any more than the pyjamas war of 2009-2012 was about appropriate shopping attire, or the Ugg-shaming days of the Celtic Tiger were about footwear. It’s about aspiration, tribalism, social class and snobbery. Being “highly active” is correlated with higher socioeconomic status, according to the Irish Sports Monitor report for 2019.

Dryrobe Man wants you to know that he is the sort of outdoorsy person who has been surfing in Lahinch, and can afford to spend €171 on what is, after all, a towel with a hood – and possibly €46 on the matching rigout for his dog. The people giving out about him want you to know that they’ve been swimming in the sea at Sandycove forever without the need for any kit fancier than a Supervalu bag.

The idea that a changing robe might become a cultural flashpoint is utterly absurd, which makes it entirely consistent with the standards of 2020. In reality, it is the confluence of two unrelated phenomena to take off this year: dressing like no one is going to see you and a renewed interest in sea swimming. Even before the pandemic, swimming was already exploding: it is now Ireland’s second most popular sport with 9 per cent of people participating in it.

According to Google Trends, searches for “Dryrobes” took off in April and reached breakout level this month. Interestingly, this seems to be a not just a peculiarly Irish, but a very Dublin-centric phenomenon. (Dryrobes have been spotted along the Atlantic coastline, but haven’t made the transition into lifestyle statement.) The other thing that happened in April was that 40 per cent of workers in the EU moved to remote working. The Venn diagram showing the intersection between first-time Dryrobe wearers and recent remote workers is probably more like a circle.

A towel that expensive is not a whimsical investment. It’s a statement of intent and a reminder that – for all we’re fed up of masks and curtains twitching and being lectured about our behaviour – there are some enforced lifestyle changes we’ll want to hold on to in the bright, new post-vaccinated world.

Remote working is the fulcrum around which so many of the positive adjustments to our lives pivot: no commute; more family time; fewer pointless meetings; more time spent in suburbs than in cities; lower costs; lower emissions; less impulse spending on shoes or another pair of wireless headphones on your lunchbreak. For some, the shift looks like it will become permanent. A global survey by Microsoft suggested that companies believe 45 per cent of employees will go on working remotely. Employees themselves expect to spend up to a third of their time out of the office.

Until now, many employers resisted remote working on the basis that employees would be more likely to skive off. Thanks to the massive global experiment in remote working conducted over the last eight months, we’ve now got the data to prove them wrong. Nearly three in four business leaders in the Microsoft survey found remote workers were at least as productive, if not more so. Other reports suggest that workers in the UK, France, Canada and Spain have been putting in almost an additional two hours a day. Even so, a zero commute job means there is still time left to do things you enjoy.

The topography of our world is beginning to reshape itself in response. There are more bike lanes springing up. The Government recently allocated €63 million to improve and expand greenways and access for walking and cycling to schools. There is a growing recognition of the value of a decent public realm in our cities: Dublin Chamber launched its “15-minute city” vision, in which everything you need is a walk or a cycle away. More people are using parks and public spaces, leading to long overdue debates about, for example, whether people or cars have first dibs on the Phoenix Park. For every residents’ committee up in arms about children playing in the courtyard, there’s probably another proactively raising funds for a playground.

The pandemic may not have turned out to be the great reset we were promised, but history suggests prolonged crises do change societies in ways that may not be immediately obvious. The bubonic plague marked the end of the Middle Ages and a period of cultural renewal. Not even the most fervent Dryrobe-wearer would suggest that the Dryrobe boom is a harbinger of cultural renewal, but it may be a symptom of a deeper, fundamental shift in our lives.