Will Israel seize the moment to bury the two-state solution? 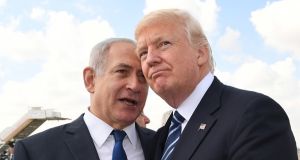 The Israeli right believes it must seize the moment presented by a US president who broke with decades of US policy on the Middle East. File photograph: Getty Images

Even allowing for the upheaval wrought by the Covid-19 pandemic, which has forced governments and their citizens to turn their gaze inward, a plan to imminently and unilaterally redraw one of the world’s most sensitive borders might be expected to excite more of a global response that it has.

Binyamin Netanyahu, having made what until very recently seemed an improbable return as prime minister of Israel, has set next Wednesday as the target date for the first steps towards annexation of around 30 per cent of the West Bank, which Israel has occupied since the six-day war of 1967.

The plan to “apply sovereignty”, as Netanyahu puts it, to Israel’s settlements in the West Bank, which are illegal under international law, as well as to the entirety of the Jordan Valley, would amount to a turning-point comparable to the Balfour Declaration of 1917, when Britain pledged to establish “a national home for the Jewish people” in Palestine.

The timing has been shaped by electoral calendars in Israel and the United States. With Donald Trump facing a fight for re-election in November, the Israeli right believes it must seize the moment presented by a US president who broke with decades of US policy on the Middle East and gave Israel carte blanche to pursue its ambitions in the region.

Palestinians would again be removed from their land, communities would be divided, and violence could well ensue

Having recognised Jerusalem as Israel’s capital, withdrawn from the Iran nuclear deal and recognised Israeli sovereignty over the Golan Heights, Trump last year delivered a “peace plan” so heavily tilted in favour of the Israelis that, as a blueprint for negotiations, it was dead on arrival.

The plan abandoned the formula that underpinned previous rounds of peace talks - two states, broadly along 1967 lines, with a shared capital in Jerusalem - and instead endorsed the idea of Israel permanently annexing nearly a third of the occupied territories, leaving Palestinians an unworkable archipelago of disconnected enclaves surrounded by Israeli land and no territorial connection to the outside world. But while Trump’s plan was never going to be the basis for serious peace talks, the Israeli right took it as a signal of its room for unilateral action.

In April 2019, just days before the first of three elections in Israel in 12 months, Netanyahu made one of his customary pre-election pitches to his conservative base by raising the idea of annexation. In a world distracted by the pandemic and in a region where Arab support for the Palestinian cause is in some places less vocal than it was, Israel’s move has provoked anger and alarm but far less uproar that might have been expected.

The European Union, which as Israel’s largest trading partner holds significant economic leverage, has been hopelessly divided on the response to what would amount to the burial of the two-state solution, the focus of the bloc’s diplomacy for three decades. While a clutch of mostly small states, including Belgium, Luxembourg, Ireland, Portugal, Sweden and Finland, have argued for a more assertive stance against annexation, they face opposition from a number of member states, such as Hungary, Poland, the Czech Republic and Austria, who typically defend Israel’s interests in EU deliberations. Hungary blocked an attempt to draw up a joint statement on the issue for a meeting of EU foreign ministers last month, according to the news agency Reuters.

When Russia annexed Crimea in 2014, the EU moved quickly to impose economic sanctions that hit Moscow’s financial, energy and defence sectors. But while EU foreign policy chief Josep Borrell has said any move to annex parts of the West Bank “could not pass unchallenged”, the EU cannot agree on what that response might be.

Annexation would be a disaster for Palestinians. The two-state solution has not been within reach for some time, but losing a third of the West Bank overnight would make it virtually impossible to establish a viable Palestinian state there in the future. Palestinians would again be removed from their land, communities would be divided, and violence could well ensue.

It would also be damaging to Israel. The occupation of the West Bank has always formally been referred to as a temporary measure, which has allowed Israel to avoid confronting questions around why settlers can have Israeli citizenship but Palestinians cannot. Suddenly, the claim that Israeli was operating an apartheid system, with one section of its population denied citizenship or voting rights, would become far more difficult to rebut. (Some Palestinian supporters welcome the Israeli move for this very reason).

Netanyahu has remained silent on the when, how and where of any annexation plan. His biographer, Anshel Pfeffer, believes he has no intention of acting on the threat. In his view, Netanyahu has worked for decades to achieve the current status quo, which suits him perfectly, and would not jeopardise that by pursuing annexation. Even if Netanyahu is serious, opposition from Israel’s Arab allies, Jordan and Egypt, could water down the plans.

But that the best chance of avoiding annexation comes down to this - the hope that Netanyahu is bluffing or that Arab powers might yet bring themselves to intervene - suggest the high cost to Palestinians of a world whose attention is elsewhere.