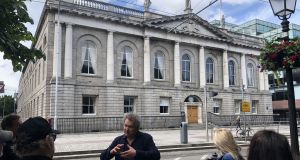 In the opening scene of the film Once, Glen Hansard’s busking character is framed against the backdrop of a dingy alleyway off Dublin’s Grafton Street. From there, he embarks on his love affair with a Czech musician, played by Markéta Irglová, consummated by their Oscar-winning song.

But only movie anoraks know that the aforementioned alley is called Tangier Lane.  And even the anoraks may not realise that behind this exotic name lurks another trans-national romantic drama, a real-life one, from the 17th century. The story starts with a wedding present, or to be more exact a dowry. No, it wasn’t the alleyway. It was the actual Tangier, a then-small but strategic port at the entry to the Mediterranean, which came as one of the fringe benefits with Catherine De Braganza, daughter of the King of Portugal, when she married Charles II of England in 1662.

Charles praised it as a “jewell of immense value in the royal diadem”. But on closer inspection, the generosity of the Portuguese was not all it seemed. Before relinquishing the port, they had helped themselves to most of the furniture and fittings, including, as an official dispatch put it, “the very flowers, the Windowes, and the Dores”.  What they left behind, meanwhile, included the local mujahideen, who waged a constant holy war against the occupying infidels, determined to get the place back.

While it might have been a nice little earner for the newly-marrieds, therefore, Tangier also had to be defended, at great expense. Financially embarrassed, England – in the manner of a gourmand who has dined well before affecting to forget his wallet – turned to its neighbour and said: “Can you get this one, old chap?” And so it happened that a bill was passed (in more ways than one), by which the cost of Tangier’s defence devolved to Ireland. In the years this highly dubious arrangement lasted, it caused great resentment. It also increased sectarian tensions on both sides of the Irish Sea because the troops sent to defend the port were also from Ireland and tended to be of the kind then known in London as “papists”.

This raised the dangers of an anti-English alliance with the Catholic powers of Europe. By the 1680s, even England realised the whole thing was a bad idea. The port defences were first destroyed, methodically, so nobody else could use them, then abandoned. The name of the lane off Grafton Street is one of the few remaining traces of a wedding gift gone wrong.

That was one of several fascinating things I learned at the weekend during a walking tour of Dublin led by Arran Henderson. Like many businesses, his “Dublin Decoded” tours have been badly affected by the lockdown. So this was a sort of re-launch among friends. And I wish I could remember more of the things he told us. Unfortunately, the friends were relaunching too, which had a deleterious effect on everyone’s powers of concentration.

Our group was like a herd of calves newly released into a field and seeing daylight for the first time. The general giddiness, and gabbiness, was such that poor Arran hardly got a word in edgeways. But during one of the brief silences, as we strolled near Leinster House, he did also impart another extraordinary story, this time from 20th-century Dublin.

One day in October 1941, a crate arrived in the docks addressed to the James Gorry gallery on Molesworth Street. It contained paintings, officially, and had been shipped from France via London.

But while unloading it, workmen heard groaning and/or tapping from inside, which was found to come from a plaster cast with air-holes, hidden in a false bottom of the crate.

The man in the plaster turned out to be Count Maurice Carrasus de Loubejac, a French aristocrat, painter, and sculptor. He was in a bad way by then, barely conscious. One version says that, somewhere along the journey in a crate marked “this way up”, workers had placed him the other way. In any case, he arrived short of air and in distress. But he was restored to health in Jervis Street hospital and in the meantime caused a spy scare.

The present proprietor of the gallery, a third-generation James Gorry, confirms the details and still has all the newspaper cuttings.

Count de Loubejac’s explanation was that he had been hoping to sell some of his art here and just couldn’t get the necessary permits.

The gallery agreed there had been correspondence but expected a more conventional arrival.

Anyway, the Frenchman did subsequently exhibit his work and was known in Dublin as “De Loubejac-in-the-box”.