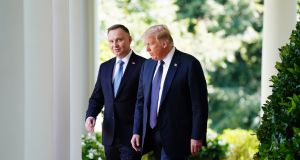 Polish president Andrzej Duda Duda was in Washington on Wednesday to get the endorsement of his ideological ally Donald Trump. Photograph: Jim Lo Scalzo/EPA/Bloomberg

Alot is at stake in Sunday’s Polish presidential election. Although the president cannot introduce legislation without parliamentary approval, a veto right would allow the victor to check the ruling Law and Justice party’s (PiS) attempts to hobble the country’s judiciary and media, a battle that has seen Warsaw at loggerheads with EU partners.

European capitals are watching anxiously. A defeat for incumbent Andrzej Duda will be seen by many as signalling the beginning of the end of right-wing PiS rule and a blow to authoritarian ally Hungary’s Viktor Orban. Only notionally an independent, Duda’s election as president in 2015 paved the way for PiS’s return to power later that year after eight years in opposition

As in the last two elections, much of PiS’s campaign has revolved around “culture war” issues such as LGBT rights. But Duda on Wednesday was also in Washington to get the endorsement of ideological ally Donald Trump. “He’s doing a terrific job. The people of Poland think the world of him,” Trump said helpfully, adding a useful hint that he might redeploy US troops being withdrawn from Germany to Poland. “I don’t think he needs my help,” he responded to questions about the appropriateness of breaking US diplomatic precedent to meet, let alone endorse, a foreign leader mid-election campaign.

PiS has combined rightwing conservatism with popular social benefit programmes for families and pensioners. Duda has focused on rallying his small-town base with attacks on what he calls lesbian, gay, bisexual and transgender “ideology”, while promising to protect social programmes. One of his staff said on Polish state TV that LGBT people were “not equal to normal people” and that “LGBT ideology” could be “even more destructive than communist ideology”.

Polls suggest that Duda will win the first round with around 42 per cent of the vote, a 10-point margin on the liberal mayor of Warsaw, Rafal Trzaskowski. But in the event of no majority, the margin would evaporate in a run-off between the final two candidates due on July 12th.