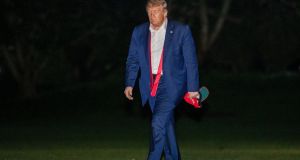 US president Donald Trump walks on the south lawn of the White House in Washington on Sunday, after stepping off Marine One as he returns from a campaign rally in Tulsa, Oklahoma. Photograph: Patrick Semansky/ AP

A day never passes when the worst president in US history does not again pile egregiousness upon egregiousness. And there is little relief at hand, except the all-too-distant prospect of an election at year-end. We have gone long past the idea that Donald Trump can get no worse. And did we mention the US death toll at 120,000 and the daily infections at one-fifth of new cases worldwide?

What does President Trump do? Repeatedly insisting his pandemic management is exemplary, he opens his re-election campaign with what doctors warn is likely to be a super-spreader rally in Tulsa.

Despite his claim that a million want to show up, most supporters showed sufficient sense to stay away – to the president’s fury, a bare-looking 6,200 gather in the 19,000-seater stadium. To date eight Tulsa staffers have tested positive for coronavirus.

To make matters worse, Trump, who insists the US has already “prevailed” in the fight and last week said the virus would simply “fade away”, told the Tulsa crowd that infection figures were simply a function of over-testing and so had told his staff to cut back on it. His press secretary’s suggestion he was “jesting” led the president to renew the claim and insist he was only “semi-tongue in cheek”.

And the Trump purges continue. The latest independent official to face the president’s axe is the head of the Manhattan prosecutors’ office, US Attorney Geoffrey Berman. His office has been investigating Trump lawyer Rudy Giuliani.

Trump has also been spending much time trying to suppress a book on his White House days by fired national security advisor John Bolton. Mostly a reprise of well-known Trump self-serving manipulations of foreign policy, it provides interesting new insights into claims he asked the Chinese president to assist his election by buying farm products from electorally useful US states and promised to help Turkey’s Recep Erdogan put the kibosh on a bank investigation.

On the international stage, let us not forget, Trump has betrayed friend and ally alike and fortified strongmen from North Korea to Ukraine, Russia, Syria, Afghanistan, Iran and China. He has wreaked havoc in the multilateral institutions, the bedrock of the post-second World War international order.

It is not just weary Americans counting the days. Could he be re-elected? A 10 percentage point Joe Biden poll lead suggests the Trump miracle could be coming to an end, but key parts of his base, including evangelical voters, remain firmly behind him and the Republican establishment continues to offer little resistance.

A great deal will turn on the path of the virus come autumn and on the outlook for the economy. For now, Biden has reasons to hope. But five months is a very long time in politics.